The Cleveland Cavaliers shocked the basketball world ahead of Thursday’s trade deadline, parting ways with six of their players and bringing in four new faces. The move has now given them a different look from the start of the season. One of the players they traded was veteran shooting guard Dwyane Wade, who found his way back to where it all started for him in his NBA career, the Miami Heat.

Even the team’s fans around the country were caught off guard with the changes their front office pulled off. However, nobody was more disappointed than a fan who is going to watch the Cavs game versus the Oklahoma City Thunder on Tuesday inside Chesapeake Energy Arena. He made a poster saying that he bought his tickets to hopefully see Wade play live, but he is no longer part of the Wine and Gold anymore.

This just goes to show that anything can change in the NBA at any given moment. Only a few days ago, the former 12-time All-Star was still donning the Cavaliers’ jersey and leading their second unit, now he is already in South Beach being welcomed warmly by the Miami fans who had only dreamt of seeing him wear the Heat’s uniform once again.

If there’s any consolation for him being a die-hard Wade fan, he can find solace on the fact that the 36-year-old made it clear after he got traded that he is happy to be part of the Heat once again. He also added that it’s where he’ll be until he decides to hang his sneakers for good. 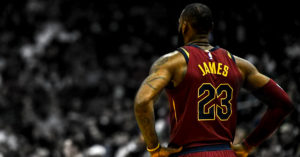 JUST IN: Cleveland Cavs are reportedly the most wine-obsessed in the NBA
Related TopicsCavaliersDwyane WadeHeat