Like many other NBA players, New Orleans Pelicans big man DeMarcus Cousins is having a hard time wrapping his head around Kyrie Irving’s request for a trade. In fact, the former No. 5 overall pick in the 2010 NBA Draft says Irving’s plea was a bit surprising.

On Thursday, “Boogie,” as Cousins is known, sat down with Russ Bengston of Complex to answer a wide range of questions. After touching on several of the moves that were made around the association this offseason, Cousins was asked about Irving’s petition.

Bengston: “Were you surprised to hear about Kyrie Irving supposedly wanting out of Cleveland?”

Irving’s trade request came in a meeting with team owner Dan Gilbert and newly-appointed general manager Koby Altman earlier this summer. As many as 20 teams have called the Cavs’ front office with inquiries regarding his availability. However, as of today, the former Duke Blue Devil remains on the roster.

Will Irving be in a wine and gold uniform at the start of training camp, as Gilbert suggested in a live press conference last month? Or will the Cavs acquiesce to his wishes and trade him away? For now, the saga continues. 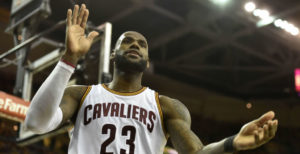