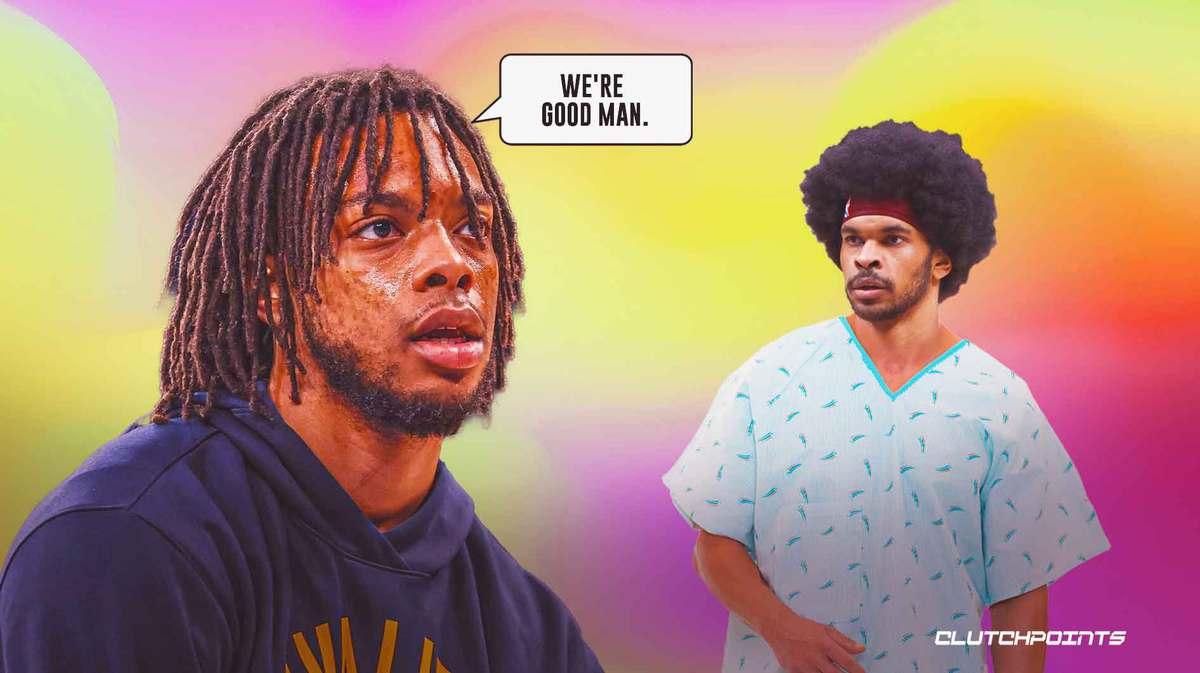 Jarrett Allen is in a race to fitness for the Cleveland Cavaliers as this squad makes its final preparations for what could be its first postseason appearance in the post-Lebron James era. Allen has been sidelined with a finger injury since mid-March and while the Cavs are hoping to get him back in time for Sunday’s season-finale against the Milwaukee Bucks, there is also a possibility that the All-Star center remains on the shelf for a longer period of time.

For his part, Cavs point guard Darius Garland got brutally honest about Allen’s absence over the past several weeks. The 22-year-old was quick to acknowledge Allen’s importance for the squad, but at the same time, Garland firmly believes that Cleveland will still fare well without Allen in the picture:

Garland is by no means undermining Allen’s contributions to the squad here. Rather, he is just speaking from a perspective that takes into account the possibility that Allen is unable to return in time for the postseason. This is the harsh reality the Cavs are facing right now and Garland is well aware of this fact.

Unfortunately, things have not been as smooth-sailing since Allen’s injury. The Cavs were 37-27 before their starting center went down. In the 17 games he’s missed since March 8th, Cleveland has won just 6 out of their last 17 contests. Needless to say, Allen is a pivotal piece of the puzzle and the Cavs will be at a clear disadvantage without him in the postseason.

Nevertheless, Garland remains unfazed. The All-Star guard points out that health has been a major thorn on their side all year long and Allen’s is just the latest in a long list of injuries throughout the season.

“We’ve been preaching this all year. Whoever steps up, they’re going to play hard and they’re going to try to do everything to get a win, so we haven’t been healthy the whole year and a lot of other teams haven’t been healthy the whole year, so that’s not an excuse for us,” Garland said. “We wasn’t supposed to be here this year — at all. We’re happy with the progress. Keep learning. Keep getting better. See where we land.”

Earlier in the campaign, the Cavs lost both Collin Sexton and Ricky Rubio to season-ending injuries. Somehow, this team fought through adversity and was able to still exceed all expectations despite their depleted lineup. This is exactly what Garland is preaching here and he has no doubt that the Cavs will be able to manage any and all hardships they may face the rest of the way.

Garland acknowledged his team’s struggles of late, but the 6-foot-1 guard remains confident in his team’s abilities.

“It doesn’t matter the slide. We’re still in the race,” Garland said. “We’re all trying to get wins and get into this playoffs. It doesn’t matter what’s going on, who’s out there. We’re gonna play hard to try and get a win. That’s the game of basketball. You see another day. We got another game Sunday, trying to get that one and see where the chips fall.”

The Cavs face an extremely tough test in their season finale on Sunday. They need a win against Giannis Antetokounmpo and the defending champions Milwaukee Bucks in order to secure their current position in the Play-In tournament. If things go in their favor on Sunday, the Cavs could overtake the Nets for the seventh spot in the East. However, with everything so tight in the Play-In spots, the worst-case scenario for Cleveland is that they could fall all the way to 10th if the Atlanta Hawks and the Charlotte Hornets both manage wins on Sunday.

Either way, it’s going to be a tough road ahead for Garland and Co. Just making it to the playoffs is going to be a major challenge for them. If the standings stay the same then they will face Kevin Durant, Kyrie Irving, and the rest of the Nets for the seventh spot in the conference. Nevertheless, Garland still likes their chances against a powerhouse Brooklyn side.

“That’s a good team over there. We’re a really good team. So, if we match up it will be another good one,” Garland said.

Confidence has never been an issue for Darius Garland and he will need every bit of this the rest of the way.