Cleveland Cavaliers rookie point guard Collin Sexton and Sacramento Kings second-year guard De’Aaron Fox both played their college basketball in the SEC. Sexton played at Alabama, while Fox thrived at Kentucky. The two have a previous relationship before their NBA days, which made the matchup on Friday even more fun.

The Kings defeated the Cavs on Friday by a final score of 129-110. Sexton finished with 23 points on 9-of-16 shooting from the field and he also dished out two assists. Fox, meanwhile, continues to impress this season. The lefty scored 30 points and registered 12 assists in 29 minutes.

After the game, Sexton was asked by reporters who is faster, him or De’Aaron Fox. Laughing, the Cavs’ rookie said the only way to find out is for the two youngsters to race.

Who's the quicker one: De'Aaron Fox or Collin Sexton? "I don't know, we gotta race. We gotta see." pic.twitter.com/TQ89YTPtaI

Both Sexton and Fox are lighting quick with the ball in their hands and considered to have track speed. It would be a treat to see these two guys race against each other in any venue.

In 25 games this season for the Cavs, Sexton is averaging 15.1 points, 3.1 rebounds and 2.5 assists per game while shooting 45.0 percent from the floor, 43.9 percent from beyond the arc and 88.6 percent from the free-throw line. With George Hill now in Milwaukee, Cleveland is handing the keys to the offense to Sexton.

Sexton has often been compared to Fox due to his speed and need to work on his jumper upon entering the NBA. Fox, now in his second season, is averaging 17.8 points, 7.7 assists and 3.7 rebounds per game while shooting 47.3 percent from the field, 41.1 percent from beyond the arc and 70.3 percent from the free-throw line. 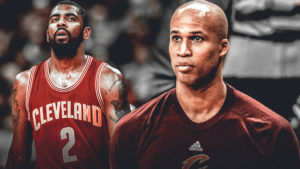