Cleveland Cavaliers second-year guard Collin Sexton is slated to replace Miami Heat rookie Tyler Herro as a member of the U.S. Team in the upcoming Rising Stars game during All-Star Weekend, according to Shams Charania of The Athletic. The Cavs guard has yet to react to the news.

Herro has missed the last four games with right ankle soreness and is unlikely to return until after the All-Star break. Sexton is enjoying a strong season as the team’s leading scorer, building from a promising rookie year.

His average of 19.7 points per game have been a pleasant surprise for a rebuilding team, though his overall floor game still has left plenty to desire, adding only 3.2 rebounds, and 2.6 assists — which falls well shy of the ideal for a natural point guard.

The 6-foot-1 guard out of Alabama was moved into the shooting guard spot soon after his dynamic with rookie Darius Garland favored the latter as the primary ballhandler — though years of evidence suggest only one of the two diminutive guards will survive this test, considering how tough it will be to play that undersized a backcourt.

The Cavs youngster will join some of his fellow second-year studs like Trae Young (also an All-Star team starter), Jaren Jackson Jr. and Devonte’ Graham, while getting a look at playing with brand new rookie talent like Zion Williamson, Ja Morant, and Herro’s teammate Kendrick Nunn.

A sound performance in this game could be the spark the Cavs guard needs to keep trucking upon this season, despite the long road ahead before the 2019-20 campaign comes to an end. 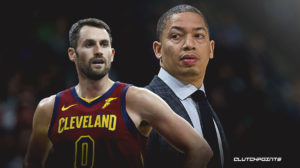