Cleveland Cavaliers second-year point guard Collin Sexton is trying to be one of the best guards in the game, so the Cavs youngster talks to Oklahoma City Thunder point guard Chris Paul at least once a week to pick his brain.

Sexton also says Cavs teammate Kevin Love and his college coach Avery Johnson have been helpful to him as he tries to become an All-Star for the Cavs:

“K-Love, Chris Paul and Coach Avery Johnson. Those guys, they’ve been where I want to get to. I just take bits and pieces of their game so that I can learn from them and understand the game even more,” Sexton told Alex Kennedy of Hoops Hype.

“My relationship with Chris goes back to high school when I played on his teams (Team CP3). Ever since then, we’ve just been building that relationship. I talk to him every week and just pick his brain and figure out how he feels about certain plays and things that I can incorporate into my game. It’s cool.”

Sexton played in the Rising Stars Game. Next season, the Cavs are hoping he will be playing in Sunday’s All-Star game.

The Cavs are 14-40. They are in 15th place in the Eastern Conference standings and likely won’t make the playoffs for the second straight season.

Cleveland, though, has to be happy to hear that Collin Sexton is taking the game seriously and reaching out to Chris Paul — one of the best point guards of all time — for tips. 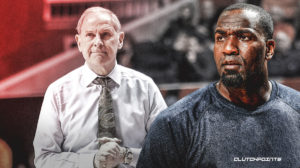 JUST IN: Kendrick Perkins on John Beilein: ‘He has to pack his bags and go’
Related TopicsCavaliersChris PaulCollin Sexton