The Cleveland Cavaliers’ longtime intrigue with the 8th overall pick in the 2018 NBA Draft was in full effect last night, as they selected Alabama guard Collin Sexton in the first round. With murmurs around the league that the Cavs were also high on Michael Porter Jr., the Wine and Gold elected to acquire the explosive point guard instead of the potential health risks attached to Porter.

When healthy, Porter is no doubt a top three talent in this draft, but with the growing likelihood he may sit out the entire 2018-19 season and still remain a question mark moving forward, the Cavs took the safe route and put their trust in Sexton. With the dynamic guard, they’ve drafted a player that can contribute straight away, and become an instant starter for one of the better teams in the Eastern Conference provided LeBron James stays in Cleveland.

Not long after having his name called, Sexton wasted no time in recruiting the King in his first interview after leaving the stage.

If Sexton didn’t make a stand with his pitch to the world’s best player, he certainly did with his request to the Cavs shortly after – wanting to wear jersey No.2 that championship point guard Kyrie Irving wore when he called Northeast Ohio home.

It was a request that surprised fans and people inside the organization, but it immediately showed the mindset of the hungry new addition who is prepared to step into the spotlight that Irving left behind.

“I feel like I’m not going to have to live up to anybody’s shoes.” “I’m going to come in and learn and be the best player I can be on the court as well as off the court.”

Sexton was in attendance during the NBA Finals as the Cavaliers fell to the Golden State Warriors in Game 4 at the Q, and went on to express his desire to be back in that atmosphere wearing a Cavs uniform next time around.

“Just the energy when I was sitting and watching the game, like the seats were shaking,” Sexton said. “Fans were screaming. Just, I feel like I’ll be ready to play in something like that when it’s my time.”

Young Bull knows won’t have much time to wait until he puts on the Cavs’ jersey for the first time, as his workouts with the team will start as early as next week and the Las Vegas Summer League kicks off in the first week of July. 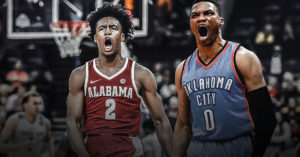