Cleveland Cavaliers rookie point guard Collin Sexton spoke to reporters following Monday’s shootaround. While discussing his approach as a starting point guard and reiterating that he believes the Cavs are at their best when the ball is moving, Sexton also noted that Cleveland has started to find its identity and strengths:

Cleveland has began to utilize more off-ball movement during regular dribble handoffs. While the down screens are still an action players see coming, it’s effective because the screens being set are solid and the shooters are capitalizing open shots. Defensively, changing the Cav’ switch-heavy defense into one predicated on individual responsibilities and lock-and-trail techniques has done wonders for the Wine and Gold.

As for individual players, the Cavs are starting to note their strengths and playing to them.

Sexton has made a living pulling up from the elbow. Jordan Clarkson is consistently able to take players off the dribble and get to the lane for a score. Tristan Thompson has shown himself to be proficient at converting on hook shots in the lane. Cleveland is even starting to seek out individual mismatches, which hadn’t been seen regularly this season until last week.

That said, after winning back-to-back games against the Philadelphia 76ers and Houston Rockets, the Cavs have just “scratched the surface” in head coach Larry Drew’s opinion. 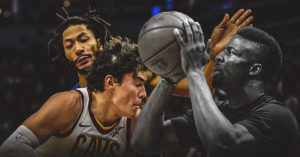