As part of a recent interview with Martin Rickman for Dime’s special MyCover feature, Cavs point guard Collin Sexton discussed what he has learned from mentors like Chris Paul and Dwyane Wade.

Sexton is entering his third season in the NBA. The Cavs selected the former Alabama standout with the eighth overall pick in the 2018 NBA Draft. A few aspects of his game jumped off the proverbial page right away, including his relentless drive and improved 3-point shooting prowess. Furthermore, it became evident that he was going to be one of the fastest players in the league.

There were some bumps along the road during Sexton’s first two seasons with the Cavs — a franchise that is still rebuilding in the wake of LeBron James’ second departure. For starters, Cleveland hasn’t posted more than 19 wins in that span. Making things a bit worse is the fact that the team is on their third coach since The Young Bull arrived. Still, he has managed to improve his level of play in a dual point guard lineup alongside Darius Garland.

So what has Sexton learned from Chris Paul and Dwyane Wade? Let him tell you:

“When I talk to Chris, he’s been on winning teams,” Sexton said. “When I talk to Dwyane, I asked him, what’s the difference between a losing team that has a bad record and a championship team? And he gives me those answers. On the outside looking in, what do they see that we need to improve on? Different things. It’s kind of different types of scenarios and just picking their brain a little bit, which is definitely good and has definitely helped me.”

According to several reports, Sexton has looked good in the Cavs’ in-market bubble practice sessions. Looking to make a big leap in this campaign, the 21-year-old guard has bulked a up quite a bit, and his work ethic continues to grow.

”In terms of his body, his shoulders are massive,” Altman said, via Cavs.com. “It’s really hard to compare him with another guard with that kind of physique. And that just speaks to his work ethic. It’s all him. We’ve certainly given him plans as far as how we want him to grow from a skills standpoint on the basketball floor. But with everything off the floor, he’s just locked in.”

With a 19-46 overall record, the Cavs were among eight teams left off the invitation list to the restart of the 2019-20 season. Knowing his team wouldn’t be playing for a while, Sexton decided to use this down time to work on his physique:

“I started eating better than I had before and I put on about 10-15 pounds of muscle,” said Sexton. “(I’ve been) doing a lot of recovery, a lot of strength training – working a lot of parts that I needed to improve on. I think it’s going to help me become faster and more explosive on both sides of the ball.

“I definitely targeted a lot of different areas. Especially once we knew we weren’t playing, I was like: Alright now let’s stick to this plan.”

For now, we’ll have to wait and see if this mentorship from Chris Paul and Dwyane Wade pays off for Sexton in terms of future success. 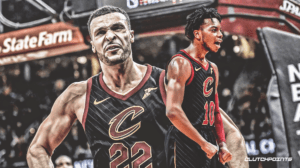