Cavs guard Collin Sexton has spoken about a time when he asked for an alarm clock for Christmas as a kid before, only for no one to ask for the details. During an appearance on the Old Man and the Three podcast with J.J. Redick and Tommy Alter, the guard for the Cleveland Cavaliers dished out the truth on the alarm clock story.

“I wanted to be better. (Asking for the alarm clock) was after a game where I felt like I could’ve done better or what not,” Cavs guard Collin Sexton said. “The other team got the best of me. Christmas was coming up and I was like (to his parents): “….I want an alarm clock”. I set it for 5:15 every morning and (I would) just make sure I ran, go dribble the ball and just make sure I did something that morning. I feel like that helped me a whole lot just because once I got to high school, once I got to college, waking up at 5 o’clock, it wasn’t nothing because I’d been doing it since I was in elementary school. It was something I didn’t realize would help me in the future and help me down the line, but I’m glad I asked for that alarm clock.”

When watching Collin Sexton play basketball, you can tell he has an affinity for the game. The 22-year-old is passionate about being the best player he possibly can and that was evident during his time at Alabama in college.

But his tireless work ethic began when he was a kid who wanted an alarm clock on Christmas so he could work on his game early in the mornings. The decision to wake up early to perfect his craft as a kid paid off when he entered high school and college with players expected to work out early.

Sexton is amid a career year with the Cavs as he’s currently recording career-highs in points (23.9) and assists (4.2). While Sexton is on the upswing in his career, the young guard credits his choice to receive an alarm clock for Christmas as a kid for his success. 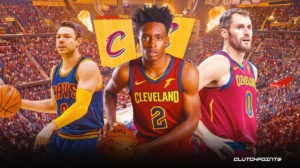