Cleveland Cavaliers guard Collin Sexton has always been eager to play with aggression in the early stages of his career in the league. However, he gained a valuable lesson from Phoenix Suns veteran guard Chris Paul who taught him to exhibit patience on the floor, especially as the lead playmaker of the Cavs.

“He told me pretty much to relax and survey the court every time I’m coming off a pick-and-roll,” Sexton said via ESPN. “For me to talk to him any time, I can reach out to him right now and he’d hit me back, it’s been amazing to have someone that I can look up to and someone that I can lean on to watch film or just to hear a word of advice.”

The 22-year-old also looked back and assessed his playing style back in his rookie campaign in the 2018-19 season with the Cavs. He realized that he needed to develop a go-to shot that will serve as his primary weapon on offense and help him endure the physicality of the league in the long run.

“I was getting hit hard,” Sexton added. “A lot of bad falls so I had to realize like, all right, let’s try to stay off the floor a little bit and use something that’s going to allow me to be in the league for a long time.”

He eventually put an emphasis on his teardrop shot which became his patented move as of late. Sexton made the floater as a huge part of his offensive arsenal which led him to lead the league in attempts made as he is currently shooting with an eFG of a little under 47%.

According to Cleaning the Glass, he is also the leading shot-maker in the league between 5 and 15 feet on the court. Despite his volume shooting from the area, Sexton has been able to maintain his efficiency which further proves that he is improving his shot-making abilities in his third season in the league.

With the mentorship of a savvy veteran in Chris Paul along with his relentlessness on the floor, the sky will certainly be the limit for Collin Sexton in the years to come. 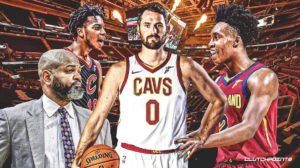