Cleveland Cavaliers guard Collin Sexton had another memorable outing on Wednesday night as the Cavs took on the Indiana Pacers in the Rocket Mortgage FieldHouse.

Sexton caught fire in the first half, scoring at will against a formidable Pacers defense. His offensive outburst included this high-difficulty reverse lay-up that left Cavs fans in awe.

Here’s a look at Sexton showing of his elite hangtime on this pretty play (h/t Bleacher Report on Twitter):

This Collin Sexton finish was too smooth 🔥 pic.twitter.com/fLNoxKRjQe

Collin Sexton blew past his defender on the wing, using his quickness and agility as he dashed to the rim for a deuce. However, he saw Myles Turner on the help and the Cavs youngster  knew that the Pacers big man is currently one of the best shot-blockers in the league. Sexton had to get creative to avoid the swat, and so he decided to pull out the reverse lay-up. True enough, his move gave Turner no chance of even making a block attempt.

Sexton has been playing some great basketball of late, and he’s been one of the biggest reasons why the Cavs came into Wednesday’s bout on an impressive four-game winning streak–albeit still out of the playoff picture in the top-heavy Eastern Conference standings. 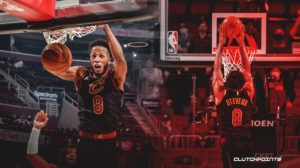