The Cleveland Cavaliers seemed to be trending in the right direction after their first two games of the season. Aside from their performance on the court, the team also has the numbers to back them up for their recent uprising.

As per ESPN Stats and Info, Cavaliers guard Collin Sexton joined LeBron James and Kyrie Irving as the only players to score 25 points in each of the team’s first two games over the last 20 seasons.

The last time the Cavs started 2-0 without LeBron James on the roster was 2000-01. pic.twitter.com/v79NvZveQV

Sexton has been a critical contributor ever since he came to the league and was drafted by the Cavaliers back in 2018. He was also given a larger role over the years and was consistently slotted in at the starting shooting guard position as of late.

The former Alabama standout balled out in the team’s season opener against the Charlotte Hornets where he recorded 27 points, two rebounds, and five assists through 37 minutes of action. The Cavaliers managed to withstand the 42-point scoring outburst of Hornets guard Terry Rozier to cruise to a 121-114 opening game victory.

In their following tilt against the Detroit Pistons, Sexton rode his momentum from the previous game and put up tallies of 32 points, two rebounds, and three assists in 45 minutes played. Motor City had no answer for the Cavaliers’ offense which escaped with the 128-119 triumph in double-overtime.

With a 2-0 record, the Cavaliers could finally hit their strides for the first time since LeBron James departed from the team back in 2018. Collin Sexton and the team will aim to continue their good showing as they vie for their third consecutive victory against the visiting Philadelphia 76ers on Dec. 27. 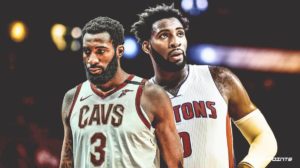