Cleveland Cavaliers guard Collin Sexton will never forget his experience guarding Stephen Curry. In fact, the Cavs’ leading scorer even considers it his “welcome to the NBA” moment.

Sexton was a guest on the Beyond The Press podcast, where he recalled the night when Curry shifted into “chef mode” before torturing the defense.

“I remember a few games. I think I was playing Warriors or something. It was just like a bad game, it was like you get cooked out there… There ain’t nothing you can do.”

Curry and the Cavs have quite the history. The Golden State Warriors fought Cleveland in four straight NBA Finals, winning three of them in the process.

Sexton isn’t alone, though. The two-time MVP is simply playing chess while others play checkers, so there’s no shame in getting placed on the menu by Curry.

For his part, the Cavs’ shooting guard continues to improve year after year. Like Curry, Young Bull isn’t without his fair share of criticisms in the early part of his career.

Since being drafted eighth overall in 2018, Sexton has managed to increase his scoring average each season. In the 2020-21 campaign, the former Alabama standout tallied 24.3 points, 3.1 rebounds, and 4.4 assists per game while shooting 47% from the field and 37% on 3-pointers.

He still has a long way to go before he could achieve consistency on the defensive end. Curry may very well run rings around him next time they face each other. However, it wouldn’t be wise to bet against Sexton’s maniacal work ethic in the long run. 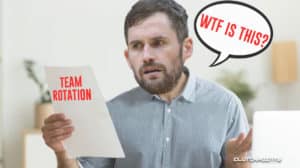