Hell of a run by @CollinYoungBull and the the entire @Cavs Summer League squad. These guys repped the franchise and the city of Cleveland with character, heart and guts we plan to continue this Fall…

This is a great sign for the Cavaliers as they enter the post-LeBron James era. At face value, the Cavs still look good and intact despite James’ absence.

Sexton will be surrounded a crop of veterans including Kyle Korver, Kevin Love, Channing Frye, just to name a few. He’ll most likely be mentored by fellow point guard George Hill. Head coach Tyronn Lue hasn’t announced whether Hill or Sexton will take the starting spot. Either way, the elder Hill will be expected to share some words of wisdom to the young gun.

Through six games in the Summer League, Sexton has proven that he can score at will. He is averaging 17.8 points per game on 43.3 percent shooting. Broken down, he seems more comfortable from inside the 3-point line. He has knocked down 37-of-80 of his 2-point shots for 46.3 percent. From downtown, he’s only 2-of-10.

Collin wears the No.2  jersey for the wine and gold. A look back at the past reveals that Kyrie Irving also wore the same number when he was a Cavalier. Though there are similarities in their game — particularly as a scoring point guard — Sexton is focused on his own game. He’s out there to be the best player he can be.

“Coming in, I’m going to set goals for myself and then as well there’s going to be team goals set,” the 19-year-old told Tom Withers of The Associated Press. “But I feel like I’m not going to have to live up to anybody’s shoes, but I’m going to come in and learn and be the best player I can be on the court as well as off the court.” 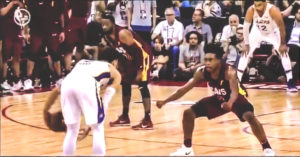