Collin Sexton is showing promising signs of growth this season and the Cleveland Cavaliers rookie is attributing some of his success to veteran shooting guard Rodney Hood.

“Rodney, that’s my guy. So, he just talks me through it, tells me to be patient and everything’s going to work out,” Sexton said to Eric Woodyard of the Deseret News. “Pretty much we talk about off the court stuff as well as how to be prepared before the game and stuff like that.

“Rodney’s a good guy, him and Alec [Burks], so I know it’s coming from a good place.”

Sexton is in a tough situation. He’s on a struggling team that fired its coach earlier this season. Furthermore, the Cavs are looking to trade away some of the veterans on the team after already dealing Kyle Korver and George Hill earlier this season. Sexton needs to lean on veterans to help him learn the nuances of the NBA.

Clearly, Sexton is learning from Hood and Alec Burks. The former Jazz teammates turned Cavs compadres are far from grizzled veterans, they’re 26 and 27 respectively. That being said, Hood and Burks have extensive experience in the league and they can be valuable sources of information for the 19-year-old Sexton.

Developing Sexton into a star is a top priority for the Cavs in an otherwise lost season. They can regroup with another high draft pick next season and look to turn the team around in short order. As long as Sexton continues to learn from the veterans on the roster, he’s heading in the right direction. 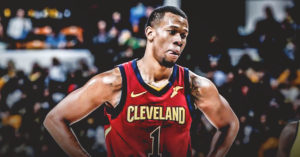 JUST IN: Cavs’ Rodney Hood believes his best days are ahead of him
Related TopicsAlec BurksCavaliersCollin SextonJazzRodney Hood