Following Saturday night’s win over the Houston Rockets — the Cleveland Cavaliers’ third win over a team with a .500 record or better this season — Cavs rookie point guard Collin Sexton told reporters that he believes when Cleveland is moving the ball, they’re one of the best teams in the league.

"It felt amazing," @CollinYoungBull told @FOXSportsOH after posting a season-high 29 points in Saturday's win over the #Rockets. "When we're moving the ball and playing together, I feel like we're one of the best teams in the league."#CavsNation

Those were strong and confident words from the rookie, who posted a career-high 29 points in the Cavs’ win, they hold weight despite Cleveland averaging just a +0.8 assist per game differential in wins versus losses this season. Though the Cavs haven’t been able to facilitate the ball at an elite rate, averaging 19.6 assists per game (30th in the NBA), they’ve been more competent at moving the ball — and themselves — in recent weeks.

Cleveland had only 15 assists on 44 field goals against Houston, which would make it seem like there was little ball movement. However, the ball often swung side to side with players looking to make the best decision — whether it be to pass, drive, or shoot — and quickly. On Friday, it just so happened that players like Sexton and Jordan Clarkson (who scored 20 points) made a fair amount of shots going one-on-one.

The Cavaliers are now 4-14, holding the NBA’s third-worst record. However, they’ve been playing without veterans Kevin Love and George Hill, who were two of the team’s leading scorers, for quite some time.

In the meantime, young players like Collin Sexton and Clarkson along with Tristan Thompson have been leading the way for Cleveland, proving themselves to be reliable offensive options. With Larry Drew looking to clean up many of the team’s bad habits, like poor ball-movement (particularly off-ball), the Cavs have begun to thrive. 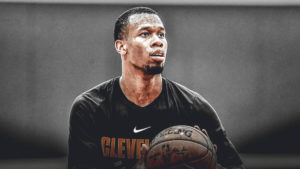