For the past four years, the Cleveland Cavaliers have played their annual Wine & Gold Scrimmage game inside the friendly confines of Quicken Loans Arena. This year, however, Joe Vardon of cleveland.com reports that the team will play their intra-squad scrimmage game at a new locale: Wright-Patterson Airforce Base.

The Cavs’ team scrimmage will be at Wright-Patt Airforce Base in Dayton next Sunday. It’s been at The Q the last four seasons

The Cavs finished the 2017-18 regular season with a 50-32 overall record, which was good for a No. 4 seed in the playoffs. After advancing through all three rounds of the Eastern Conference Playoffs, Cleveland was defeated by the Golden State Warriors in the Finals, 4-0.

The Cavs will look quite a bit different in the coming season. Gone are the days of LeBron James’ reign in The Land. Enter a new era of talented, young players who will be looking to make a name for themselves, including first-round pick Collin Sexton, as well as second-year teammates Cedi Osman and Ante Zizic.

Though James decided to join the Los Angeles Lakers in the offseason, Kevin Love decided to stay in Cleveland, signing a four-year, $120 million extension. Love was the focal point throughout his days with the Minnesota Timberwolves, as most hoops fans know. Now, though, the former UCLA stand-out will be the front-man for the Cavs.

The odds are against the Cavs this season, according to most experts and analysts. Despite that fact, head coach Tyronn Lue says his team is going to be competitive, and they’re up for the challenge.

“Of course I would love to have LeBron James, but now that he’s gone, it’s going to be a new challenge,” Lue told the Boston Globe in August. “I think me and my coaching staff, we’re up for it. It’s going to be different, a lot of young guys that we can try to teach and mold them how you want them to be.

The Wine and Gold Scrimmage will not be open to the general public, according to a report from Dayton Daily News. However, all active duty, guard and reserve Airmen will be able to attend.

Will the Cavs make the playoffs this year? Perhaps, but the road to reaching that point will be long and arduous. Regardless, this is a team that seems ready to prove themselves — without James. 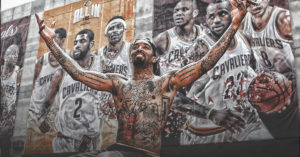