Report: Cavs working to set up next week interview with J.B. Bickerstaff The Cavs parted ways with Larry Drew earlier this month, leaving the team in search of a new head coach. There have been several names listed as candidates for the job in recent days, but now a new face is emerging.

According to a report from Joe Vardon of The Athletic, the Cavs are interested in setting up a meeting with J.B. Bickerstaff, who was relieved of his head coaching duties with the Memphis Grizzlies on April 11. If everything goes as planned, the two parties will come together sometime next week.

Sources told The Athletic, the Cavs and Bickerstaff are working to set up an interview for next week.

Bickerstaff, 40, would be the first candidate with previous NBA head-coaching experience to interview with Cleveland. But he fits an emerging profile of the Cavs’ coaching search in a number of ways, including his ties to the organization.

J.B. Bickerstaff would be a fine playcaller for the Cavs, and he already has a few ties to the franchise, as Vardon noted. His father, Bernie, serves as Koby Altman’s senior advisor. Bernie has over 30 years of experience as a head or assistant coach in the NBA. And furthermore, he served under Mike Brown as an assistant during Cleveland’s 2013-14 season.

J.B, now 40 years of age, was promoted to head coach of the Grizzlies after the team decided to part ways with David Fizdale in the 2017-18 season. However, he was relieved of his duties in April of this year after failing to reach the playoffs.

Altman and the Cavs have several other candidates in their sights, including Utah Jazz assistant Alex Jensen and Nuggets assistant Jordi Fernandez. With Bickerstaff, though, Cleveland would be getting an experienced leader. Whether or not he’ll actually land the job remains to be seen. 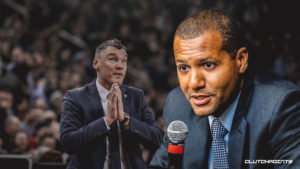