The Cavs are signing power forward Jarell Martin to a one-year, non-guaranteed deal, according to Adrian Wojnarowski of ESPN.

Martin played with the Orlando Magic last season after playing the first three years of his NBA career with the Memphis Grizzlies.

Jarell Martin has career averages of 5.4 points and 3.5 rebounds in 184 games while shooting 43.4 percent from the field, 34.6 percent from beyond the arc and 76.6 percent from the free-throw line. He was the 25th overall pick in the 2015 NBA Draft out of LSU. The Grizzlies traded Martin to the Magic last summer.

The Cavs’ frontcourt depth is headlined by Kevin Love, Tristan Thompson, Larry Nance Jr. and Ante Zizic. Martin is 6-foot-10, so he’ll most likely play the power forward position for the Cavs.

The Cavs won just 19 games last season. If Love stays healthy in 2019-20, Cleveland should win more than 19 games, but they probably won’t compete for a playoff spot.

Right now, the main focus of the Cavs is the development of Collin Sexton, Cedi Osman and rookies Darius Garland and Kevin Porter Jr. In the second post-LeBron James era, Cleveland actually has some nice young talent it can build around.

The Cavs could look to trade Love, Thompson or Jordan Clarkson at the 2020 February trade deadline. 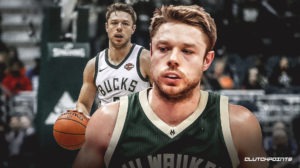