Earlier this afternoon, ESPN and Associated Press writer Chris Sheridan sent out a tweet that has Cleveland Cavaliers fans standing at attention. Shortly before 1:00 p.m., Sheridan reported that Cavs superstar LeBron James is “100% leaving” after completion of the NBA’s upcoming season.

There are many experts and analysts who agree with Sheridan and his source. However, there are also those who do not. Joe Vardon of cleveland.com, a journalist who has covered James’ illustrious career longer than just about anyone, sent out a tweet of his own to refute the claim.

For what it's worth (damn it, I'm on vacation), three sources close to LeBron said this latest tweet about him is 100 percent false

I have more: three sources paid particular attention to LeBron's relationship with ownership, and said LeBron does not view it that way

And finally, one of the sources close to LeBron said there is no NBA source who could speak on his behalf in the way it was reported

Whether or not James will leave the Cavs has been a topic of discussion in corner bars and barbershops for quite some time. It’s true, he can indeed become a free agent after this season, and there are some Cavs fans who are willing to accept his departure — if it comes to fruition. Yet, there are others hoping he’ll choose to end his career in Northeast Ohio.

Sure, there are some issues that James has likely taken into consideration: the now-infamous letter that Cavs owner Dan Gilbert wrote in 2010, the departure of former Cavs general manager David Griffin after this year’s NBA Finals, Kyrie Irving’s recent request for a trade, and the structuring of the Cavs’ roster in general. Despite all of those concerns, James, a truly forgiving person, has given no clear indication of his intentions for next season.

Whichever decision the King chooses to make, there is no doubt that his legacy has already been cemented in the city of Cleveland, as well as his home town of Akron. For now, let’s just enjoy the ride. 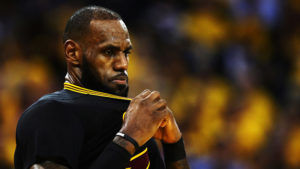