Cavs have lowest odds to win Central Division at 25/1

The Cleveland Cavaliers chances at winning the Central Division are not very good. According to BetOnline.ag, the Cavs are 25/1 to come out on top in the Central. They have the same odds as the lowly Bulls. Bet Online is giving Indiana and Milwaukee identical odds at 5/4. The Detroit Pistons are in between the pairs at 6/1.

It’s hard to argue with these odds too much, but the Cavs are far more likely to win the division than the Chicago Bulls. Cleveland lost the best player in the world. There’s no doubt that LeBron James’ presence will be sorely missed. But they have a promising young player in Collin Sexton, an All-Star that can assume a greater role in the offense in Kevin Love, and a bevy of role players.

Love can be the focal point on the offense in a weak Eastern Conference. If Sexton exceeds expectations early, this team becomes dangerous. Kyle Korver is one of the best shooters in the league and George Hill is a reliable guard. They’re certainly not favorites to win the Central, but the young and inexperienced Bulls don’t have the potential stability of this Cavs roster.

Milwaukee and Indiana deserve to be the favorites heading into next season. Indiana will go as far as Victor Oladipo will take them and the same goes for Milwaukee and Giannis Antetokounmpo. Oladipo and Antetokounmpo are on the cusp of superstardom and they are two of the best players in the Eastern Conference.

Detroit remains a wild card with a new coach coming in and the Blake Griffin experiment entering its first full season.

With the competitive teams at the top, Cleveland likely won’t win the division, but it’s too early to completely write them off.

BetOnline.ag boasts the most extensive online sportsbook with live lines and odds on all major sporting events. To place your bets today, click here. 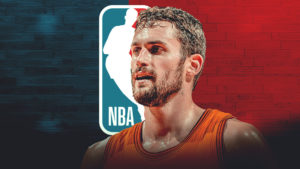