Whenever the 2020 NBA Draft takes place, the Cleveland Cavaliers will once again have a high pick. Before the NBA suspended play due to COVID-19, the Cavs had the second-worst record in the league at 19-46 and the franchise may have interest in drafting Israeli draft prospect Deni Avdija.

Per Chris Fedor of Cleveland.com, the Cavs have done “extensive work” in scouting Avdija, who currently plays for Maccabi FOX Tel Aviv :

Israeli swingman Deni Avdija is on the radar. The Cavs have done extensive work on him. Director of scouting Brandon Weems saw Avdija in person earlier this season. Altman returned in early March from an in-person trip to Tel Aviv. Gansey stayed overseas a bit longer, watching three Avdija games and bouncing around to other locations to get one last look at some other international prospects, including Theo Maledon, Killian Hayes and Leandro Bolmaro.

Here’s a video of Avdija breaking down film from his season at Maccabi FOX Tel Aviv .

The Cavs are looking to build their franchise around Collin Sexton, Darius Garland, Andre Drummond and Kevin Porter Jr. The Cavs could possibly trade Kevin Love once this season ends and let Tristan Thompson walk in free agency.

One thing is clear: the Cavs need as much talent as possible right now in the second post-LeBron James era. 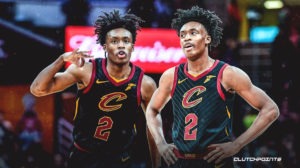 JUST IN: Cavs’ Collin Sexton speaks out on suspended season due to COVID-19
Related TopicsCavsDeni Avdija