Earlier this month, Larry Drew and the Cavs decided to go separate ways, leaving the team in search of a new head coach. There have been several names tossed about as candidates for the job in recent days, including Utah Jazz assistant Alex Jensen.

According to a report from Joe Vardon of The Athletic, the Cavs reached out to the Jazz in an attempt to set up a meeting. Permission was granted, and the two sides are set to touch base next week.

The Cavaliers sought and were granted permission to interview Utah assistant Alex Jensen for their head coaching vacancy, sources told @Tjonesonthenba and I. The interview is expected to take place next week.

Jensen would be a fine coach for the Cavs, if he were to land the job. As a former player himself, he knows the ins and outs of everyday life in the NBA. He played his collegiate ball at the University of Utah, where he earned Mountain West Conference Player of the Year honors (2000).

Jensen, now 42 years of age, has found success on the coaching level as well. In 2011, the Canton Charge offered him their first head coaching gig. And in 2013, he became the D-League Coach of the Year. Shortly after that, he was added to Utah’s coaching staff as an assistant.

The Cavs are said to have other interviews lined up, but general manager Koby Altman wants to make sure he finds the right person for the job:

In a recent meeting with the media, Altman described what sort of coach he is looking for, as well as what sort of timeline to expect:

Exactly who the Cavs will have as their next head coach remains to be seen, but it’s clear that they are exploring all of the options at their disposal. 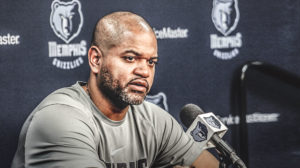