According to Chris Fedor of Cleveland.com, the Cavaliers are excited to see a healthy John Henson suit up for Cleveland this upcoming 2019-20 season.

Fedor was bored the other night and asked Cavs fans if they had any questions for him, as he played another edition of “Hey, Chris” on Twitter. One particular fan was concerned about Cleveland’s defense this season. Chris noted that Henson’s return could potentially help the Cavaliers in that department.

Henson was traded to the Cavaliers in early December last year as part of a three-team deal involving the Milwaukee Bucks (Henson’s previous team) and the Washington Wizards.

The 6-foot-11 big man suffered a torn left wrist ligament on November 28 – just a little over 10 days prior to the trade – and had to undergo surgery. Consequently, Henson never appeared in a Wine and Gold uniform last season. He finished his season with just 14 games under his belt (all with the Bucks) where he averaged 5.6 points and 5.1 rebounds.

With a significant amount of time to recover, John Henson has a prime opportunity to carve out a role with the Cavaliers. As it stands, he is the third string behind starter Tristan Thompson and backup Ante Zizic. However, nothing is set in stone, and this could change by as soon as opening night.

With the Bucks, Henson has shown potential as a rim-protecting big. The Cavaliers need plenty of help on the defensive side of the ball. Perhaps Henson is just the right man to anchor their defense. 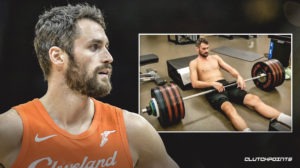