Earlier this offseason, the Cavs announced that they would be constructing a Wall of Honor at Rocket Mortgage Fieldhouse in the near future. Now, thanks to a report from ESPN’s Marc J. Spears, the names who will be included in the inaugural class have been revealed.

According to Spears’ report, the first names to be etched onto the Cavs’ Wall of Honor will include Wayne Embry, Bill Fitch, the late John Johnson, Nick Mileti and the late John “Hot Rod” Williams. Spears also notes that these names will be revealed in a game against the Philadelphia 76ers on November 17.

Younger Cavs fans may not recognize all five of these names, but each of them made significant contributions to the organization in their own right.

Embry revolutionized the NBA in the early 70’s, becoming the leagues first African-American general manager. The Springfield, Ohio native served with the Cavs from 1986 to 1999, earning Executive of the Year honors twice (1992, 1998).

Fitch, now 87 years of age, served as Cleveland’s first head coach, accepting the position from the new franchise in March of 1970. The Cavs went 15-67 on his watch in their inaugural campaign, but their records began to improve as the seasons went by. Who was this team led by, you ask? None other than the legendary Austin Carr, Mr. Cavalier himself.

Johnson, who passed away at the age of 68 in 2016, was Cleveland’s seventh pick in the 1970 draft. The Mississippi native went on to become the first Cavs player to participate in an NBA All-Star Game. It seems right to have his name among the first on the team’s Wall of Honor.

It was Mileti and a group of his business partners that purchased the ownership rights to the Cavs in 1970, allowing the franchise to enter the NBA as an expansion team. The Cleveland native gave a reported $3.7 million for the team at that time. He sold his 20 percent stake in the team for $1.4 million in 1980.

John “Hot Rod” Williams — need we say more? The name speaks for itself. If you’re a die-hard Cavs fan, you know exactly what this man meant to the organization. Cleveland selected the 6-11 forward with the 45th overall pick in the 1985 NBA Draft. Alongside teammates Ron Harper and Brad Daugherty, Williams made the NBA’s All-Rookie Team for the 1986-87 season. And to this day, he is still among the all-time blocked shot leaders in Cavs history, trailing only Zydrunas Ilgauskas — a player who will likely see his name etched into the Wall of Honor as well. 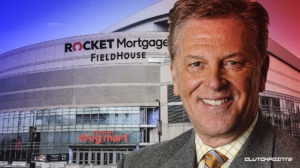