Via Twitter, Frye declared that Rose — a former Most Valuable Player of the league — is back:

Congrats to Drose, he told me he’s back. I see he tells no lies!!! https://t.co/evMc22AroZ

The Cavs guard in Smith, for his part, took to Instagram and posted a photo from Rose’s emotional post-game interview. Enclosed is a long caption, acknowledging Rose’s struggles and eventual triumph:

I’m so proud of you bro! No one knows you’re struggle what you went through day in an day out! You are truly inspiration to everyone! Super proud to have had you as a teammate! Keep going bro! #pooh

Just last season, Derrick Rose found himself donning the wine and gold with LeBron James and Dwyane Wade. The Cavs were among the teams Rose went to in his search for a home. Since his string of knee injuries, teams played it safe on Rose. Either they didn’t want to sign Rose or only signed him for a short contract.

Frye and the others got a personal view of Rose’s struggles. As most concluded that Rose’s career is officially over, Rose himself was determined to come back. After all, he sustained the injuries when he was in his mid-20s. He still had a long way to go then before deciding to move away from basketball.

And tonight’s 50-point performance is a culmination of the discipline and dedication that Rose has put it. And his wine and gold brothers are simply happy. 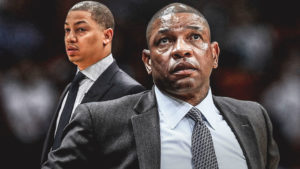