Channing Frye gets a tribute video from the Warriors Channing Frye hasn’t used 2018-19 as his farewell tour, but the sharpshooting big man is nevertheless hanging it up at season’s end. Unlike Dwyane Wade, who exchanges jerseys with an opposing player after every game, and the likely retiring Dirk Nowitzki, who’s been increasingly subject to honors opposing arenas as the season has worn down, Frye’s final campaign has been conducted with almost no fanfare whatsoever.

Until Friday, that is, when the Golden State Warriors played a hilarious tribute video before their game against the Cleveland Cavaliers that called Frye one of the “top 800 scorers in NBA history.”

Pregame tribute video for Channing Frye shown on the jumbotron at Oracle. Steve Kerr watching it with Frye. They start cracking up when it says Frye is “proudly among top 800 scorers ever.” pic.twitter.com/ycuwjvwj9a

Note who’s standing next to Frye, cracking jokes as the video plays on the screen above the Oracle arena floor: Warriors coach Steve Kerr, who like Frye played in college at the University of Arizona. The pair also got to know one another with the Phoenix Suns during the 2009-10 season, when Kerr was general manager and Frye played for the team.

The eighth overall pick of the 2005 draft, Frye never quite lived up to the two-way potential that made him such a highly-valued prospect out of Arizona. He missed the entire 2012-13 season after doctors discovered he had an enlarged heart as a result of dilated cardiomyopathy, putting his career in jeopardy.

But Frye returned to the court one year later, starting all 82 games for the Suns in 2013-14. He won a championship with the Cavaliers over Kerr’s Warriors in 2015-16, shooting a remarkable 56.5 percent from beyond the arc in the playoffs while coming off the bench as a stretch 5.

Frye, 35, has played the role of mentor for a rebuilding Cleveland squad this season, appearing in just 34 games. 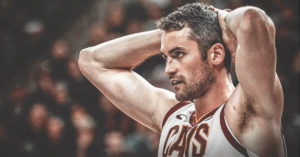 JUST IN: Kevin Love won’t play for the Cavs against the Warriors
Related TopicsCavaliersChanning FryeSteve KerrWarriors