Teammates of Cleveland Cavaliers retiring veteran big man Channing Frye had a bit of fun — at his expense — when discussing the 35-year-old’s potential career once he hangs it up at the end of this season.

Tristan Thompson started things off, saying that Frye would likely take on a career in broadcasting, but probably not in the most typical of formats.

“He will probably do the Road Trippin’ thing,” he said. “Some kind of podcast. He’s hilarious though. He would be great for like, if they ever did something where they break down live games, but unedited style, so he can be like, ‘That m—–f—– is weak as hell.’ Or like, ‘That’s trash. That’s garbage.’ Instead of saying it was a bad shot, he will be like, ‘That’s garbage.’ (Could he really do broadcasting and filter himself?) He could. (Love interrupts) Sure he could. See, this is my problem. I’m just going to butt into every conversation.”

Larry Nance Jr. appeared to be on the same page, but added a bit of insight pertaining to Frye’s physical apperance.

“Broadcasting,” said Nance. “Unfortunately they are going to put him on TV when he’s got a face for radio, but that’s what he will do.”

With regards to Frye’s physique, former Cavs teammate Richard Jefferson’s answer was not as diplomatic.

“He’s going to get fat,” exclaimed Jefferson. “That’s probably the only thing I think is guaranteed. He’s going to be fat.”

Kevin Love saved the day by getting a bit serious about what he thinks the future holds for his buddy.

“I’m not going to say he can do anything, but I think he can continue to do what he’s doing with a podcast because I think he has a big reach and can transcend any sport,” Love explained. “He can talk to anybody and I’m not going to say he’s going to be like a Joe Rogan, but he can be a guy that can bring on anybody from any walk of life, any background and maybe he won’t get into politics too much, but I think he can go to different sporting events and cover things in a different way and attract a lot of viewers because when he talks it’s kind of unfiltered and uncut and people like the rawness of it all. He’s definitely going to do something where he’s speaking. Because that’s what he does and it draws a lot of people to him. But I know for one thing, he’s going to help my foundation (Kevin Love Fund) in a big way because his story is amazing and people love hearing that, not only from what happened with his parents but also his heart.”

Channing Frye has had a colorful career in the NBA, and based on what his teammates had to say, it appears that his retirement is going to be as, if not even more colorful. 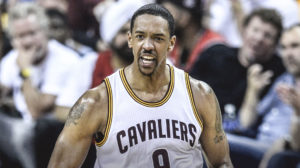