There’s nothing better than roasting your friend’s serious Instagram post just to blow up their spot. Channing Frye did exactly that to Tobias Harris’ latest Instagram.

Frye responded by asking Harris if this is what people without friends say. Frye is one of the most savage roasters in the NBA and the wily veteran always seems to get the last laugh on social media.

Harris and Frye were teammates for a season and a half with the Orlando Magic. They played together on a truly bad team. The Magic went 25-57 during the 2014-15 season although Frye and Harris each turned in solid seasons. Harris averaged 17.1 points per game as a 22-year-old and really began to blossom as a player.

Frye’s stats don’t jump off the page, but he did shoot just under 40 percent from behind the arc on 4.6 attempts per game. Frye reinvented himself midway through his career and became a lights-out three-point shooter who could stretch the floor and rebound.

That was only a few years ago, but both players have come so far in that time. Frye won a championship with the Cleveland Cavaliers in 2016 and Harris has blossomed into one of the better wings in the game. It’s nice to see that Frye is still capable of roasting his old teammate.

But big, bad Boban Marjanovic might want to have a word with Channing next time he sees him. Boban is one of Tobias’ best friends and he might need to remind Frye that Harris does have some friends. 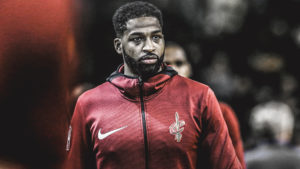