Beilein is in the same shoes Stevens was in back in 2013. Stevens left Butler after a successful college run to take on the NBA game. Now, Beilein is trying the same thing with the Cavs after coaching in the college ranks for 41 years.

Because Beilein has so much experience under his belt, Stevens believes the new Cavs coach is going to make his transition to the pro game much easier than he did.

“He’s a great coach, does a lot of fun things and he’s a great person,” Stevens said, via Chris Fedor of Cleveland.com. “We served on a lot of committees together in the NCAA. I’ve said this about many people, but when you were recruiting against John Beilein you knew it was a fair fight, a real fight and he was going to do it the right way. I have a lot of respect for John. He’s a heck of a coach and he will do a great job in Cleveland.

“He was a head coach for 20 years by the time he was my age now. I mean, he’s never been an assistant. He will be a lot quicker than I was.”

Beilein has some nice young talent to work with in Cleveland. The 66-year-old will be tasked to develop Collin Sexton, Darius Garland, Cedi Osman and Larry Nance Jr.

The Cavs still have All-Star Kevin Love and veterans Tristan Thompson, Matthew Dellavedova and Brandon Knight. That will make Beilein’s job a lot easier this season as he navigates through is first NBA campaign. 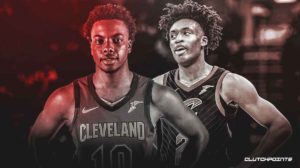 JUST IN: The Darius Garland-Collin Sexton combo will work for the Cavs
Related TopicsBrad StevensCavsCelticsJohn Beilein