Head coaches and front office members of Cleveland’s three major sports teams — the Cavs, Browns and Indians — are joining forces in a newly-formed alliance to address social injustice in the city and surrounding area, according to a report from ESPN’s Adam Schefter.

The goal of this new initiative is to develop sustainable strategies that will address racial injustice in all of Northeast Ohio. As part of the alliance, the teams will focus on ways to improve relationships between citizens and police. The group will also look for ways to develop more education opportunities for those who might need it.

Coaches and general managers across all three major sports in Cleveland have come together in this effort. Cavs General Manager Koby Altman and Head Coach J.B. Bickerstaff can be counted among the participants, as can Browns General Manager Andrew Berry and Head Coach Kevin Stefanski. Indians President of Baseball Operations Chris Antonetti, General Manager Mike Chernoff and Manager Terry Francona are also joining this worthy cause.

Aside from the names previously mentioned, players from each team will also have an opportunity to get involved in this cause.

“We have an extraordinary opportunity to make a lasting impact on society and the Cavaliers are committed to help bring about change,” Altman said, via Cavs.com. “The social and economic disparity in our community reveals some ugly truths, and Coach Bickerstaff and I are honored to be at the table to address these issues with such a prominent group of our peers. We never take for granted our place in the fabric of Cleveland and hopefully our coming together inspires others to join us.”

News of this joint effort comes in light of Jacob Blake’s shooting in Kenosha, Wisconsin over the weekend. According to several reports, an unarmed Blake was shot multiple times in the backside by Kenosha police officers who were responding to a domestic incident report. The injuries that Blake sustained have left him hospitalized and paralyzed from the waist down.

Several NBA players have decided to make statements in the wake of Blake’s shooting. And on Wednesday, the Milwaukee Bucks, as well as a few other teams, decided to boycott their scheduled games. It was an unprecedented gesture, but the message was clear. The players are looking for real change — not just Black Lives Matter tee shirts.

The NBA’s Board of Governors is set to meet on Thursday morning to discuss their next actions, and whether or not play should continue. 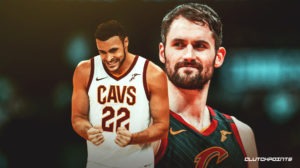