The Milwaukee Bucks reportedly tried to acquire shooting guard Rodney Hood from the Cleveland Cavaliers in a deal which would have included big man Thon Maker, according to Marc Stein of the New York Times.

The Bucks and Maker’s camp are actively working to find a new home for 2016’s No. 10 overall draft pick. One example: Word is Milwaukee tried to use Maker in an attempt to acquire Rodney Hood from Cleveland but were foiled when Portland put together a trade for Hood on Sunday.

The Bucks are trying to get more shooting around superstar Giannis Antetokounmpo and Rodney Hood would have helped them in that aspect. Hood is a career 36.8 percent shooter from the 3-point line and is shooting 36.2 percent from deep this season.

Thon Maker reportedly wants out of Milwaukee. A fresh start with the Cavs could have been just what the 7-footer needed since he would have received a lot of playing time in Cleveland. Maker is averaging 4.7 points and 2.7 rebounds this season with the Bucks in roughly 11 minutes per game. 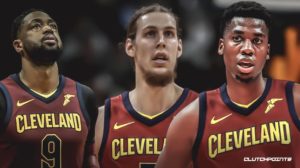