Windhorst, who covered the Cavs on a day-to-day basis that season, says Irving is a “hell of a player, strange man.”

“Kyrie is a strange dude,” Windhorst said on the Brian Windhorst & The Hoop Collective podcast. “They (Celtics) win Game 1. He played okay. He kind of took over in the second half. He runs over to his family after winning Game 1 in the same vein Tiger (Woods) ran over to his family after winning The Masters. He’s celebrating with his dad. I’m all for it.

Irving, of course, shocked the basketball world in the summer of 2017 when he requested a trade from the Cavs. The All-Star guard reportedly got tired of playing in the shadow of LeBron James.

Uncle Drew becomes an unrestricted free agent this summer. No one knows if Irving is going to re-sign with the Celtics or take his talents elsewhere. 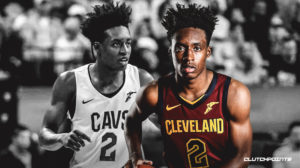 JUST IN: This season’s Cavs gave us something we haven’t had in a while
Related TopicsCavsKyrie Irving