Anthony Bennett would’ve dropped out of lottery if Cavs didn’t pick him No.1 Anthony Bennett will always be remembered as one of the biggest – if not the biggest – draft busts in the history of the NBA. The Cleveland Cavaliers spent a No. 1 pick on Bennett during the 2013 NBA Draft and all that they got from the former UNLV Runnin’ Rebel was a total of 52 games in which the forward averaged just 4.2 points and 3.0 rebounds.

The memory of Bennett continues to haunt Cavs fans to this day, and a story told by ESPN’s Adrian Wojnarowski on his The Woj Pod podcast is not going to help them recover from their post-Bennett traumatic disorder.

That draft night, it was funny, if you go back and look at – I guess if you went back and looked at Twitter, I’m pretty confident – I’m almost sure of this – there’s a tweet from me around, I want to say, 7 o’clock that night saying, hey, Anthony Bennett has a real chance to drop tonight.

And I was right except for, I was going through teams like two, three. I had gone as far as, I want to say, 14 or 15, who were saying to me, “He’s not really on our board. We’re not taking him. If he got to us, I still like guys better than him.” I spent the afternoon going through really every – I don’t know if I talked to all 15, but I had a very strong feeling from most of them, that if he got to them, they were passing on him.

Cleveland is a city with an abundance of horrific sports stories. Prior to LeBron James and the Cavs winning an NBA title in 2016, Cleveland’s sports landscape was dominated by endless failures and heartbreaks – and Cleveland mistaking Anthony Bennett for Anthony Davis was among those on the list.

Cavs fans don’t need to be reminded that their team could’ve gotten Giannis Antetokounmpo, Victor Oladipo, or Rudy Gobert instead of Bennett, but only a few though knew at that time that those three were going to be the stars they are today. 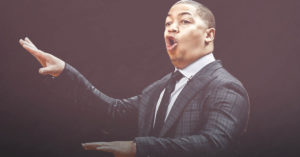