Everyone on the Cleveland Cavaliers wants to know what Andre Drummond is going to do when it comes to his 2020-21 player option worth $28,751,775.

The Cavs, who acquired Drummond from the Detroit Pistons at the 2020 trade deadline, are expecting the rebounding machine to pick it up given the uncertain economy we are living in due to COVID-19.

In an extensive interview with Chris Fedor of Cleveland.com, Drummond talked about his 2020-21 player option with the Cavs.

“As of right now I’m just focusing on what I can worry about. Working on my game. Right now, just worrying about what’s happening with the next couple of months, before the season, whenever it’s time to start, and when that time does come to make that decision everybody will know. Right now, I’m a Cleveland Cavalier. In terms of extending, we will find that out when the time comes around,” Cavs center Andre Drummond said.

“I still haven’t thought much about what’s going to go on with free agency. I’m in close communication with my agent, so we will start to have those conversations relatively soon…I’m just letting things play out the way they’re supposed to play out and when that time comes, when we need to make a decision, I will have my answer ready.”

Drummond finished the 2019-20 season with averages of 17.7 points and 15.2 rebounds in 57 games with the Pistons and Cavs. Cleveland wasn’t invited to Walt Disney World for the NBA restart, so Drummond was only able to play in eight games with the Cavs following his trade from Detroit.

Assuming Drummond does the expected and picks up his player option, it will be interesting to see if the Cavs keep the 27-year-old on the roster past the 2021 trade deadline. Drummond has only been to the playoffs once, while the Wine and Gold are a ways away from becoming a postseason team.

With that being said, it makes sense for Cleveland to try and trade Drummond for assets. 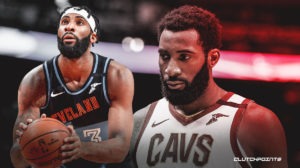