Cleveland Cavaliers center Andre Drummond recently sat down for a Bleacher Report AMA. The Cavs big man discussed topics that spanned from moving to Cleveland to thoughts about the suspension. One response addressed a question frequently asked in the NBA: comparison to other players.

Adam Wells of Bleacher Report noted that when he asked the 26-year-old to compare himself to any NBA player in history, the Cav answered, “Bill Russell or Karl Malone.”

Bill Russell is credited for the Celtics’ domination throughout his career, widely regarded as an elite defender and shot-blocker. The NBA Hall of Famer also led the league in rebounds for four seasons. In fact, he is one of only two NBA players to grab more than 50 rebounds in a game.

On the other hand, Karl Malone is regarded as one of the most durable players in NBA history. Malone was a physical defender and rebounder, lauded for his footwork and finesse. He often famously heads towards the paint and draws fouls at will.

Drummond, of course, is an elite rebounder, leading the league in rebounding for four seasons. He also spent eight years as a franchise player in Detroit and earned two All-Star selections before being traded to the Cavs

Drummond’s future in the Cavs organization is up in the air. After all, the suspension effectively cut short his first season with Cleveland — at least temporarily. Only time will tell whether Drummond fits well and if he stays with the Cavs long enough to be in their history books. 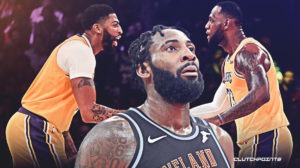