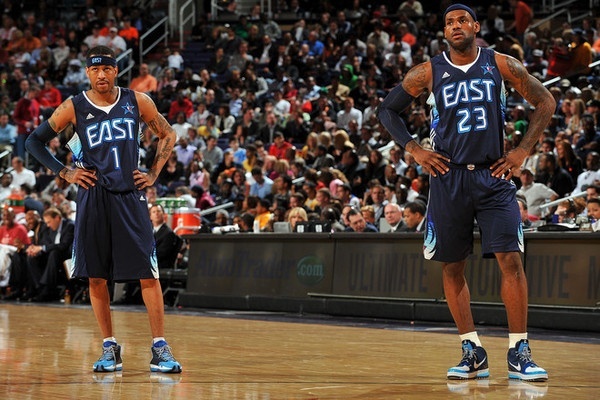 With just over 50 days remaining until the start of the 2017-18 NBA season, former Philadelphia 76ers great Allen Iverson has already determined that Cleveland Cavaliers superstar LeBron James is his favorite to win the league’s MVP award.

“Give me one name, off the top of your head, who you think is going to be the MVP in 2018,” a reporter from balldontstop.com asked Iverson at a recent Big 3 League event.

“It can always be LeBron,” Iverson replied without hesitation.

“Who do you got, though, based off of everything that has happened this offseason?,” the reporter asked, probing for more information.

“I’ma go with LeBron, regardless,” Iverson replied with a stare. “I go with LeBron, and then it’s everybody else. But it’s so many great players, man — no disrespect to none of those young guys. It’s some bad little dudes that’s ride’n out, but you know, LeBron is always at the forefront.”

Iverson, one of the best ball-handlers in NBA history, knows a thing or two about being valuable to a team. For his spectacular play with the Sixers during their 2001 campaign (career-high 31.4 points and 2.8 steals per game), the 11-time All Star was given the league’s MVP trophy.

Sure, there will be other players in consideration for 2018 MVP honors. However, just as Iverson said in his interview, LeBron will likely be at the forefront of the discussion.