J.R. Smith’s straightforward proclamation that he’s hoping for a trade out of Cleveland had some speculating whether or not the NBA would slam him with a fine. The league doesn’t want its players publicly requesting trades, but according to Joe Vardon of The Athletic, Adam Silver doesn’t expect Smith to be fined for his comments. Silver also mentions that Cavs general manager Koby Altman is attempting to resolve the situation internally.

That begs the question: By handling the situation internally, does that mean Altman is trying to trade Smith or preparing to discipline him? Or maybe even both?

Regardless, it’s clear there is a disconnect between Smith and the organization that appears to be beyond repair. The team wants to move in a younger direction, but Smith doesn’t want to ride the bench and serve mostly as a mentor to the younger guys on the squad.

It’s a bizarre situation, but after LeBron James’ departure, Tyronn Lue’s firing, and the ensuing power struggle between the front office and “interim” head coach Larry Drew, what else could Cavs fans expect. Not much is going right for Cleveland at the moment. If you’re a Clevelander, the city was awarded the All-Star Game in 2022, but other than that, there isn’t much to cheer about.

The organization appears to have been caught in between a rebuild and trying to be a contender. The ensuing fallout has not been pretty. J.R. Smith won’t have to pay a fine for his public talk of a potential trade, but that doesn’t change the fact that things continue to devolve in Cleveland. 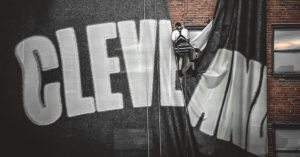