FULL HIGHLIGHTS: Cavs Fall To Nets Despite A Combined 50 Points From LeBron James And Kyrie Irving, 98-106 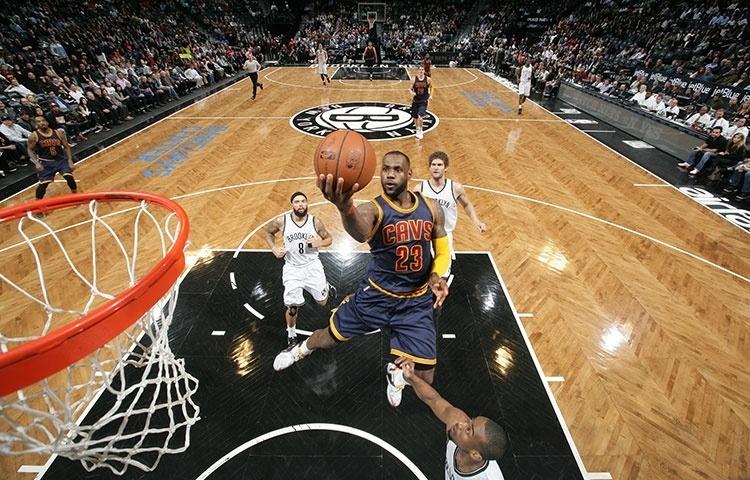 On the final night of three-game road trip, the Cleveland Cavaliers fell to the Brooklyn Nets tonight 98-106. Kyrie Irving scored 26, but it wasn’t enough as Brooklyn had five players in double figures led by 20 apiece from Joe Johnson and Brook Lopez.

The Cavs scored the games first five points before Brooklyn came storming back. The Cavs biggest lead was just five points as the Nets recovered and used a 10-4 run to take a 29-27 lead at the end of the first. They continued in the second quarter with eight straight to take their biggest lead at 37-29. Cleveland scored on seven of their next eight field goal attempts as they got hot offensively, but couldn’t stop the Nets and still trailed at that point 48-50. LeBron scored six of the final eight points of the half for the Cavs and they trailed 56-57 at halftime.

The Nets outscored the Cavs by two in the first quarter and only one in the second, and the game stayed close as Cleveland outscored Brooklyn 23-22 in the third. Cleveland used a 6-0 run to retake a lead at 63-61, but Brooklyn once again answered back. The teams exchanged baskets seemingly every time down the stretch as neither team led b more than four points in the entire quarter.

Jarrett Jack, Joe Johnson, Bojan Bogdanovic, and Brook Lopez took charge in the fourth quarter, scoring 25 of the Nets’ 27 points, with the other two points coming on free throws from Alan Anderson. The Cavs missed shots from all around the perimeter in the fourth, which ultimately caused their demise tonight. LeBron had eight fourth quarter points and Irving had six as the Cavaliers fell 98-106.

Kyrie Irving led the way with 26 points, two rebounds and three assists. LeBron James had 24 points, five rebounds, nine assists, and five steals. Kevin Love scored 18 points to go along with seven rebounds. Timofey Mozgov and J.R. Smith struggled as they scored two and eight points, respectively. The Cavs got little help from the bench once again tonight as Iman Shumpert pitched in nine, Thompson added eight, and James Jones hit a three-pointer to give the Cavs 20 points.

Cleveland struggled shooting the ball at just 45.7% tonight, including 8-30 from downtown. They also had just 17 assists after dishing out 30 last game.

The Cavaliers return home at 47-27 for a Sunday night matchup against the Philadelphia 76ers.

How David Griffin Has Helped Build A Championship Contending Roster