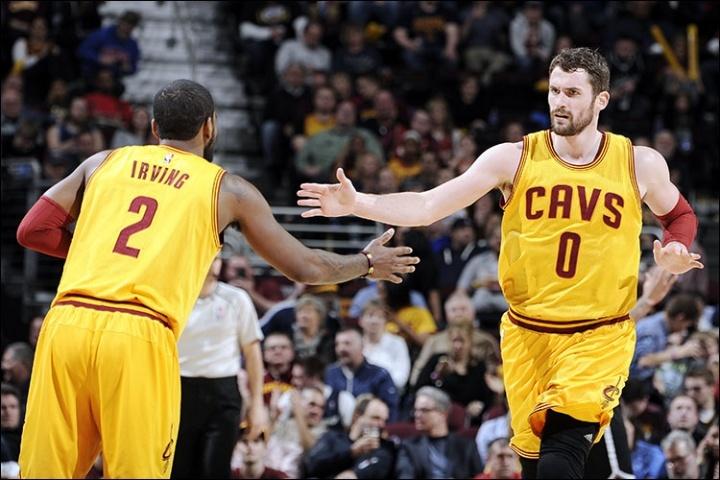 The Cleveland Cavaliers were back home after more than a week of being on the road. After a 3-1 trip in the states of Texas and Florida, the Cavs defeated the Brooklyn Nets at home 117-92. It was the 14th straight home victory for Cleveland, who haven’t lost since the January 7th loss to the Houston Rockets, when LeBron James was still out with an injury. Kevin Love made his return from a two-game absence due to rest.

The Cavs started out very slow tonight, as the Brooklyn Nets took an early 20-7 lead halfway through the quarter largely due to sluggish play on the Cavaliers’ part. But they came back by the end of the first with a 14-2 run to get within one, and ended the quarter down 26-23.

J.R. Smith and Iman Shumpert caught fire to start the second quarter, scoring 16 Cavalier points in less than four minutes of play. And five minutes into the second, the Cavs already had a 41-30 lead. The intensity had definitely picked up defensively as the Cavs were holding the Nets to one shot and defending very well. Behind 14 points from Smith and nine from LeBron, the Cavs scored 36 second quarter points to take a 59-47 halftime lead.

Cleveland continued their run in the second half, taking a mere seven point lead at 59-52 and extending it with a 22-6 run to blow the game open at 81-60. The Cavs were rolling and hitting threes from everywhere. The fourth quarter was time for the Cavs’ starters to rest as the bench got a take at the Nets. Kevin Love and Kyrie Irving sat the entire fourth, and LeBron got the final six minutes off. Even with the bench in, Cleveland outscored Brooklyn 23-19.

For the first time in a very long time, Cleveland did not have a 20-point scorer in a game, let alone a victory. Timofey Mozgov and J.R. Smith had 17 points, LeBron James had 16 and seven assists, Kyrie Irving had 12 points and 10 assists, and Kevin Love had 10 points and 11 rebounds while taking just two three-point attempts. The Cavs bench scored 45 points led by 10 apiece from Iman Shumpert and Tristan Thompson. As a team, the Cavs had seven players in double figures, shot 54.9% from the field, 51.7% from the three-point line, and had a whopping 32 assists on the night.

A Miami Heat-Cleveland Cavs series in the playoffs is becoming more and more realistic with the way the standings are set. In the locker-room, LeBron was watching the Miami Heat-Portland Trailblazers game, per Jason Lloyd:

The Cavs take on the Indiana Pacers at home on Friday night, a team that the Cavs have had trouble with, at least on the road.

Kevin Love grabs the rebound, sends it downcourt to Kyrie Irving on the fast break. Irving drives, draws the defense and dishes to a cutting LeBron James for the dunk!

Kyrie Irving drives to the basket from the wing and puts the ball over Thaddeus Young’s head. Immediately after that move, he finds a cutting Timofey Mozgov for the slam!