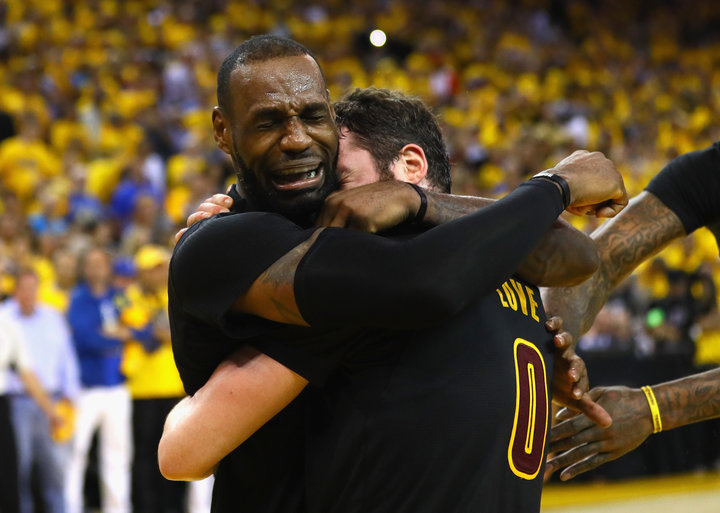 Cavs need Kevin Love to return to his Minnesota form, but can he?

Cavs need Kevin Love to return to his Minnesota form, but can he?

With Kyrie Irving gone, the Cleveland Cavaliers will have a new-look offense for the 2017-2018 season, especially with new point guard Isaiah Thomas currently sidelined with a hip injury. According to head coach Tyronn Lue, PF Kevin Love will be taking on a larger role this season, taking over the role vacated by Irving as the Cavs’ secondary scorer behind LeBron James. This should be music to fans’ ears, as Love has been somewhat underutilized during his three seasons in Cleveland, and hasn’t been nearly as effective as he was in Minnesota. Will a bigger role help Love grow as a player, and can he return to his Timberwolves’ form?

In 2011-2012, Love averaged 26 points, 13.3 rebounds, and 2 assists per game, while playing 39 minutes a night, in what was his finest season to date. Back then, Love was the definition of a focal point. The Timberwolves surrounded him with the likes of Ricky Rubio, Wesley Johnson, and former Cavalier Derrick Williams. Love had no help, either offensively or defensively The strategy was run down the court, pass the ball to Love in the post, and see what he could do with it. Because of his stretch-4 skills and volume of .scoring opportunities, Love was widely regarded as a top-10 player, and by some as top 5. His next campaign was injury-riddled, and he was limited to just 18 games, in which he averaged just 18.3 points and shooting only 22% from three-point range. However, the next season he regained form, posting numbers almost identical to his 2011-2012 season.

Once Love was traded to the Cavs, his usage rate dropped significantly, as he was playing with ball-dominant players such as Irving, LeBron James, and for half a season, Dion Waiters. In Love’s first season in Cleveland, he averaged 16.4 points and 9.7 rebounds in 34 minutes per game. Pedestrian numbers for him, but very good for a third option. His season ended in the playoffs when Kelly Olynyk famously dislocated Love’s shoulder, an action many Cavs fans are still bitter over. The next year, Love’s numbers were very similar; 16 points and 9.9 rebounds in 31.5 minutes per game. Last season was Love’s best in a Cavs’ uniform, as over 60 games, he averaged 31.4 minutes per night, 19 points and 11 rebounds, while shooting 43% and 37% from deep.

Love is a curious player. He is a nightmare mismatch for 28 NBA teams, and is crucial to the Cavs’ chances of breezing through the eastern conference and beating presumably Boston in the ECF. But against the Golden State Warriors, with the way the Cavaliers have gameplanned these past three years, he’s been neutralized. This is more of the Cavaliers failing to use him(and their entire offense) correctly rather than the Warriors figuring out how to stop him.

Essentially, the Cavs have been attempting to beat the Warriors at their own game; run a fast-paced offense focused on fast breaks and getting open three-point shots, and push the ball up the floor quickly after possession changes. This ended up working in the 2015-2016 Finals, but the Warriors’ addition of Kevin Durant changed everything. With Golden State running a lineup of Curry, Thompson, Igoudala, Durant, Green, and the Cavs attempting to counter that with Irving, Smith, James, Love, Thompson, the advantage was firmly Golden State’s. With all five players capable of knocking down a three-pointer, and playing good defense, both in transition and in half-court sets, the Warriors’ were able to expose Irving and Love’s lack of defense, as well as Love and Thompson’s lack of speed and athleticism needed to run constant fast breaks. The Cavs had no choice but to keep Love and Thompson on the floor, as Thompson is their only good big man defender, and Love’s backup, Channing Frye, is about as bad defensively as it gets.

In the 2015-2016 NBA Finals, the Cavs were without both Irving and Love, but managed to push the Warriors to six games. This was because of their offensive strategy; instead of pushing the ball up the floor and looking to counter the Warriors’ every move, Cleveland chose to slow the tempo down and play a form of “bully-ball”; they exploited size and strength advantages, most notably from LeBron James and Timofey Mozgov. The Cavs put up a valiant effort in that series, including some of the greatest single game performances in Finals history from James, but ultimately fell short because of their lack of healthy talent.

This is where Love returning to his Minnesota form is key. If the current Cavs team plays bully-ball against these Warriors, they can win. The overarching strategy should be to get as many high-percentage looks as possible, while limiting the Warriors’ offensive possessions to as few as possible. The less threes Golden State takes, the fewer they can make.

With Isaiah Thomas and Derrick Rose, the Cavs have two point guards who are decent distributors, very good scorers, but poor defenders. This isn’t too big of a problem, as Kyrie Irving is a bad defender as well, and it’s extremely difficult to even slow down Stephen Curry, JR Smith is a good defender, as is LeBron James. Love is improving in that area, but is still subpar. Thompson is very effective against both Draymond Green and Zaza Pachulia. Off the bench, Jae Crowder will be able to guard both Klay Thompson and Kevin Durant, and while stopping Durant is essentially impossible, putting Crowder on him will allow LeBron James to conserve his energy.

Slowing down the offensive tempo will allow the Cavs to run an actual offense. Putting Draymond Green in a pick-and-roll situation is something the Cavs didn’t do nearly enough of. With increased ball movement, the Cavs can use their size to their advantage. Golden State’s defense is, however, a valid concern. With the versatility in length and position on defense, the Warriors can throw a lineup of defenders at Kevin Love. However, a unique talent like Love should be able to find mismatches against any opponent. Whether its getting more touches in the high post against Draymond Green or on the block against Kevin Durant – usage can really change Love’s potential.

Getting Kevin Love more touches should be priority number one. During his best season, he shot 45% on 19.3 shots per game. Last year, he shot 43% on 14.5 per game. His volume is down, and so his his shot percentage. This really shouldn’t be the case because back in Minnesota, he was double and triple teamed constantly. It’s difficult for teams to do that now because of the presence of James and other Cavs players. But Love is attempting 1.4 more three-pointers every game than he did in 2011-2012, which is due to his role. The more post touches he gets, the more shots he’ll make. His improved passing skills will also be compounded, as he can distribute to slashing teammates or open shooters on the perimeter as defenders crash to help on defense against him.

Love’s performance in the Finals this year was in between acceptable and exceptional. He carried many of the same shooting struggles as his teammates, but his impact on both ends was more noticeable than the season before.

Due to the departure of Kyrie Irving, Kevin Love should garner a larger role this season, and that is great news for the Cavs.

JUST IN: While currently king of the NBA, how much longer will LeBron James own the throne?
Related TopicsCavaliersKevin LoveLeBron James