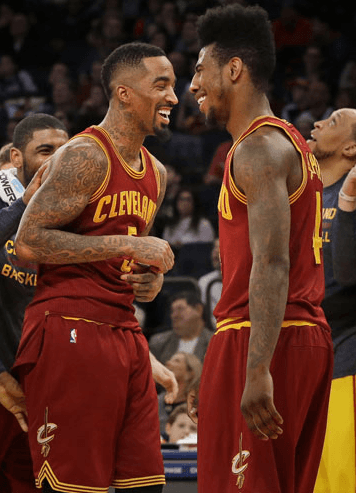 When the Cavs made the early January trade to net J.R. Smith and Iman Shumpert, they knew that they would be getting two guards with very different playing styles. On one hand, they got J.R.: an offensive minded veteran player who is never afraid to shoot the ball. On the other hand, Shump: A defensive minded youngin’ who had begun to make a name for himself as a 3 and D player. From the first game they played in Cavs uniforms, it was apparent that they really liked their situation. J.R. slid into the starting SG spot and has played very well with the other starters, averaging 12 points, 3.2 rebounds, and 2.9 assists per game. Everyone has also seen his vast improvement in defense: he stays with his opponent and he doesn’t get caught off guard. Shumpert has averaged 7.9 points, 3.4 rebounds, and 2.2 assists this season off the bench. Shump is the kind of player who can play with anyone, which is why he and Double T are usually the first two guys off the bench.

J.R. and Shump are often mentioned as the supporting factor in the Cavs turning their season around. Prior to the trade, the Cavs were sitting in 6th place in the East. Since the trade, the Cavs have jumped up to the 2nd seed, and have been been destroying opponents day in and day out. J.R. has been put in his ideal position and team, and it seems that he will want to stay. He can either opt into his player option, or decline it and work out a new contract with the Cavs. The Cavs might prefer the latter, since they could offer a portion of his salary in the form of a signing bonus as to create some more money to use to sign other free agents. Shump will most likely stay, although he will be over-paid. Elite defenders like Shump are hard to come by today in the NBA, and the Cavs will not want to let him go. They will match any offer sheet he signs.

Look for the Cavs to re-sign Shump for somewhere around 4 years, $20 million, but the figure could go up if he signs an offer sheet that the Cavs will have to match.

Click “Next” to see who the number three free agent the Cavaliers have to work a deal with this summer!