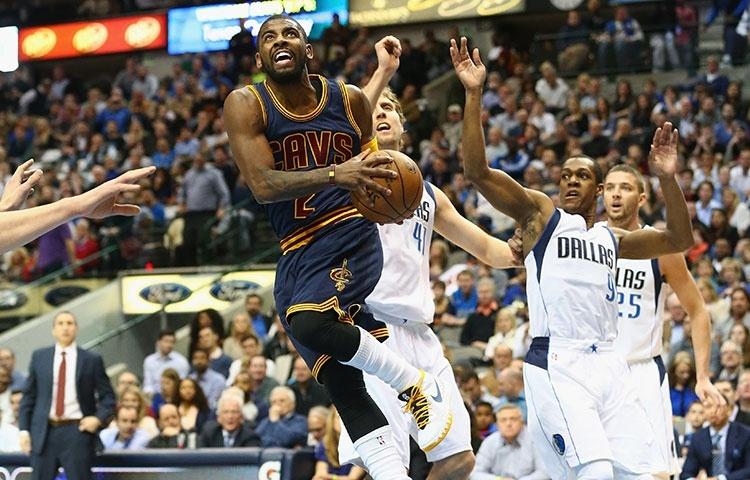 The Cavs marched into American Airlines Center looking to break .500 on their 16-16 record away from Quicken Loans Arena. They did just that, blowing out the Dallas Mavericks 127-94. It was the largest margin of victory over the Mavericks in Cavalier history. It took the Cavs only one quarter (the first) to get both their defense and offense going. After giving up 31 points in the first quarter and trailing by five, the Cavs picked up their D, especially on Dallas’ screens and were able to hold Dallas to just 22, 23, and 18 in the following quarters. The Cavs also got hot on the offensive end, leading to a 41 point second quarter and a 14 point lead at halftime. They didn’t stop there though, as they went on to outscore the Mavs by nine in the third and 10 in the fourth.

Just about everything went well this game, however no performance is perfect, and the Cavs did display some flaws. The biggest flaw would have to be the recurrent post defense. While the big men were able to contain Dirk Nowitzki and Tyson Chandler, holding them to 22 combined point, the Mavs were able to score 44 total points in the paint. If the Cavs end up playing teams with good post offense, this could be a problem in the playoffs. The Cavs also fouled a lot, leading to 33 free throw attempts by the Mavs. Tyson Chandler was able to get to line 8 times, which led to 7 of his 9 points. Coming into tonight, Cleveland was the only team who didn’t allow opponents to shoot at least 20 free throws per game (19.7 is the exact number).

But enough about the negatives – the Cavs were nearly perfect in just about every other aspect of the game. Their defense was on point and they were able to hold the Mavs to 94 points, 10 below their season average. I thought Iman Shumpert was going to get arrested after he tallied 6 of the Cavs 11 steals tonight! Add those to a few key blocks and the Cavs were able to convert 25 fast break points. They were also able to shut down the Mavs shooting especially around the perimeter. The Mavs shot 33-81 (40.7%) and just 5-20 from three-point land (25%).

On the opposite end of the court the Cavs performed BIG TIME. The starters led the way with 108 of the 127 total points. The Big Three got a little help from J.R. as the four of them had 20+ points. LeBron played without his headband again and came away with 27 points on 10-14 shooting. He was 4-of-6 from beyond the arc and added eight assists as well as seven boards. Kyrie also helped the cause with 22 points on 6-13 shooting, five assists, and five rebounds. He drove to the basket aggressively and got to the line where he knocked down 9 of 10 free throws. Kevin Love snagged another double-double as he went for 21 points, 14 rebounds, and two assists on 9-17 shooting. J.R. also came up big with 21 points on 8-14 shooting. Someone must’ve slipped something into his Gatorade, because he was unconcious from downtown, knocking in 5-of-8 threes. The big man Mozgov was the only starter to not hit the 20 point mark, but he came close with a solid 17. He hit 7 of 8 free throws and also pulled down four boards.

Overall, this is the performance the Cavs need to look for as they move towards the playoffs. Bouncing back from a lackluster 89 point, albeit victorious effort, against the Suns, the Cavs were able to come away with an impressive 127 tonight, 25 points higher than their season average. They did so by executing – finding open shots everywhere on the court. They shot 44-87 (50.6%) with 15-32 (46.9%) shooting from beyond the arc. Add that to 54 points in the paint and getting to the line 29 times, and you have one of the best offenses in the game. Pair that with their defensive efforts of holding the fourth best offense to just 94 points and you have a championship caliber team. The Cavs improve their record to 41-25 which moves them to 1 1/2 games ahead of the Chicago Bulls in the Eastern Conference. The Cavs will stay in Texas as they play the San Antonio Spurs Thursday night at 9:30 PM EST.

LeBron blocks Chandler Parsons on one end and the Cavaliers recover. J.R. Smith shoots a pass to Kevin Love for the three-pointer, which is followed up by a rebounding Timofey Mozgov!

Kyrie Irving takes the screen and goes up for the two handed slam!

LeBron James splits the Chandler Parsons and Dirk Nowitzki double and throws it down hard! 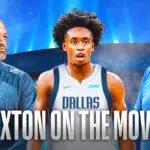