While most of the hype surrounding Cleveland tonight revolves around the acquisition of sharpshooter Kyle Korver, a second, equally important trade occurred to help facilitate Cleveland’s trades. According to NBA Insider for ESPN, Brian Windhorst, Cleveland has traded their 2017 first round pick to Portland, in exchange for the return of their top-10 protected 2018 First round pick.

Cleveland previously shipped off their 2018 first round pick to Portland during the deal that sent Channing Frye to Cleveland early last year. Additionally that trade created the $9.8 trade exception that Cleveland has yet to use.

As of the time of this article there is no word about if this pick has any protection, though likely Cleveland would attempt to apply at least top-10, if not lottery protection just in case of the worst case scenario.

Stick with Cavs Nation for more trade updates throughout the evening. 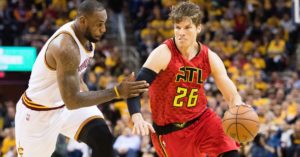 JUST IN: Report: Cavs send Mike Dunleavy and a pick to Atlanta for Korver
Related TopicsCavaliersTrailblazers