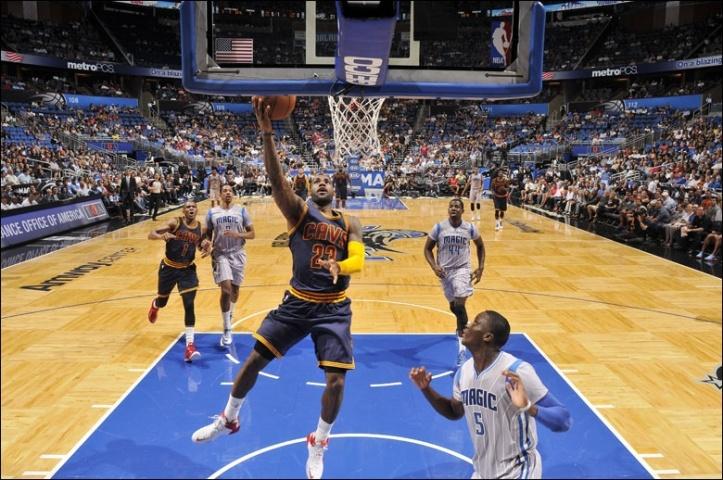 The Cavs cruised into Orlando fresh off of a two-day rest and an impressive victory over the San Antonio Spurs looking to extend their win streak to four straight games. They did just that as the Cavs sailed away with an easy win against the Magic. The Cavs continued producing offensively as they put up 123 points to the Magic’s 108. It was the third straight game that the Cavs have scored at least 120 points, a pretty impressive feat.

With Kevin Love resting his back tonight for tomorrow’s matchup against the Heat, the alternate “Big 3” picked up the slack offensively tonight. Kyrie scored a team high 33 points on a fiery 12-15 shooting. He was also 5-of-6 from beyond the arc and managed to pick up four boards and four assists.

Kyrie Irving made 11 consecutive 3s (dating back to Thursday) before finally missing just now. 7/7 vs Spurs, 4/5 through 2+ quarters vs ORL

J.R. Smith got some golf pointers from Bubba Watson on Saturday, and must have gotten some shooting tips as well, because J.R. was equally hot, going 6-11 from downtown and 7-14 overall, picking up 25 points. LeBron James finished with a double-double of 21 points and 13 assists. He also added eight rebounds in his 35 minutes. James Jones was the help the team needed off the bench, going 4-8 from beyond the arc. Overall, the Cavs continued to be hot offensively. The motion offense was run to perfection, allowing the Cavs plenty of open shots. The Cavs went 45-76 (59.2%) shooting, and 18-35 (51.4%) from 3 point range.

On the other end of the court, the defense left some to be desired for. After turning the ball over 17 times in the game, they allowed the Magic to convert those into 17 of their own points. They also left a lot of shooters open, as Tobias Harris, Nikola Vucevic, and Victor Oladipo each registered 20+ points when it was all said and done. The Cavs were also outrebounded 44-34, and allowed 17 offensive rebounds, but that can be attributed to missing the double-double machine in Kevin Love. This number will hopefully improve with Love playing as the playoffs approach. The defense was a bit disappointing as the Magic were able to shoot 42-88 (47.7%), including 9-19 (47.4%) from downtown. The Magic ended up with 108 points, which is 13 higher than their 95 points per game average. Luckily, the Cavs stayed hot and ended up with a phenomenal offensive performance.

This moment in the third quarter was a scary one after LeBron landed very awkwardly after a block attempt. Thankfully, James was okay, got back up and continued playing. Here’s the incident:

They’ll look to take down Miami in South Beach tomorrow night on ESPN on the second half of a back-to-back set. Last time LeBron came back to South Beach, the Cavaliers couldn’t contain the Heat as Miami ran away with the game late in the fourth quarter to put the Cavs away. This time, Cleveland will have J.R. Smith, Iman Shumpert, and Timofey Mozgov to give the Cavs a different look than before.

LeBron was very complimentary of Heat and their playoff push. Said he thinks emotions of MIA return will be bit less intense than Dec. 25.

James takes the pick from Mozgov and rolls to the rim. LeBron finds him for the easy alley-oop slam!

LeBron James goes for a two-for-one late in the first quarter. James drives, gets grabbed and pulled down and still finishes the play for the and-1!

Iman Shumpert goes aggressively at the rim and puts back a James Jones missed three-pointer with a layup while getting fouled!

Iman Shumpert picks off an errant pass by Aaron Gordon and dunks it all by himself on the other end, tomahawk style:

Kyrie Irving knocked down his first four three-point field goals. That gave him 11 straight made threes without a miss since the beginning of his 57-point explosion against the Spurs: