The Cleveland Cavaliers went on an incredible streak last postseason when it came to knocking down three-pointers. The Cavs had double-figure three-pointers made in the first eight games of the playoffs, averaging 16.8 threes per game, and in 15 of the 20 postseason games.

The Cavs broke an NBA playoff record set by the Golden State Warriors by making 20 three-pointers in game during Game 2 of the first-round series against the Detroit Pistons, only to have the Warriors break that record by making 21 three-pointers four days later against Houston. In the Cavs’ next series, however, they made an NBA record-shattering 25 three-pointers. To top that off, they also set the record in a four-game series and nearly broke the record for most threes in a seven-game series…in just four games, per ESPN Stats & Info.

Although that was last year, the Cavs’ blistering shooting from downtown has carried over into this season. One would think that the Golden State team with three of the best three-point shooters in the league would lead in threes made, but that hasn’t been the case. To start the season, the Cavs have had six games with double digit three-pointers made and they’re averaging 13.3 threes made per game, which leads the entire NBA. In second place is the Houston Rockets, who are averaging 12.8 three-pointers per game. The Cavs are second in the league in threes attempted per game behind Houston, and are shooting 38.5% from downtown, good for sixth in the league.

Kyrie Irving has led the way with 3.0 three-pointers per game, followed by J.R. Smith with 2.8 triples, Channing Frye with 2.5 triples, Kevin Love with 1.8 triples, LeBron James as well as Iman Shumpert with 1.2 triples, and Mike Dunleavy with a one triple per game.

Can the Cavs continue to stay this hot from downtown? Well, don’t look now, but the Cavs next opponent on Tuesday night is…Atlanta Hawks. 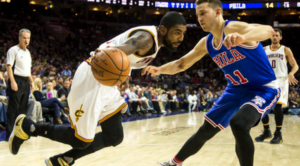