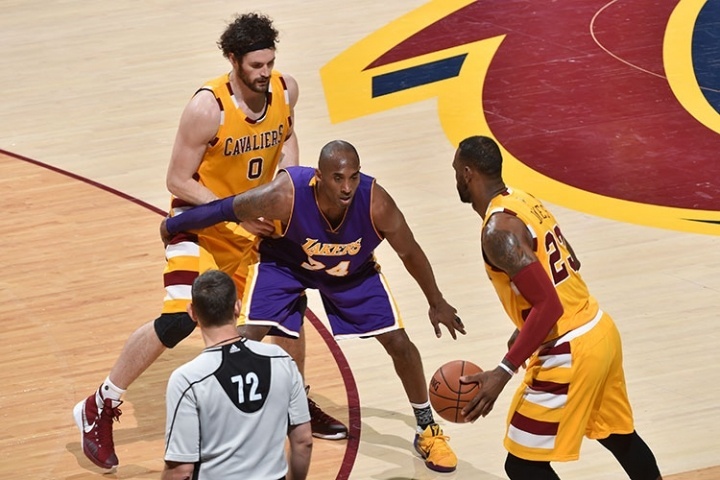 The Cavs hung on for another victory tonight as they defeated the Los Angeles Lakers in what was Kobe Bryant’s final appearance in front of the Cleveland fans. The Cavs dictated the pace and held a solid lead for almost the entire game, taking advantage of the Lakers in almost every facet of the game. LeBron James and Kyrie Irving led the way once again for the Cavs, combining to shoot nearly 60% from the field. LeBron poured in an all-around game with 29 points, 11 assists, and seven rebounds. Kyrie went over the 30-point mark for the second straight game with a season-high 35 points and seven assists.

The Cavs set a fast tone early on in this one, racing out to a 35-25 first quarter lead. On two separate occasions the Cavs went on 9-0 runs, and that was just in the first 12 minutes of the game. LeBron tallied eight points and four assists in the quarter, and the team hit shots from all over the court to build an early lead.

The pace slowed down in the second quarter but the Cavs maintained a comfortable lead throughout. Former Ohio State guard D’Angelo Russell nailed three consecutive threes to bring the Lakers to within six points of the Cavs, but they would not get any closer than that for the rest of the game. Kyrie Irving scored 10 of his season high 35 points in the second quarter, and four separate Cavaliers hit shots from behind the arc in just the second quarter alone.

Kyrie would continue to attack after halftime, scoring 8 more points in the third. The Cavs would push the lead to as many as 22 points at 88-66. The Cavs lost Kevin Love for the game during the third quarter, as he would head to the locker room with an apparent shoulder injury. He did not return to the game, but it wasn’t a problem as the Cavs would keep a strong lead, despite a short run by Kobe Bryant and the Lakers late in the fourth quarter.

Kobe led a late charge by the Lakers, cutting the lead to 8 after a 10-2 run at 108-100. This would be as close as the visitors would get, however, as baskets by J.R. Smith, Kyrie and LeBron pushed the lead back to a comfortable 11 points with less than two minutes remaining. Kobe was taken out of the game with 40 seconds remaining, and the Cavs fans showed their respect with a standing ovation and chants of “Kobe! Kobe!”

The Cavs are off for the next eight days and won’t play again until after the all-star break. They return to action on the 18th as they host the Chicago Bulls. They head into the break with a 38-14 record, and having won 8 of their last 10 games. 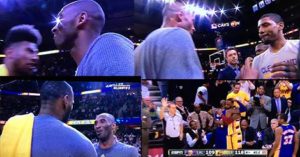