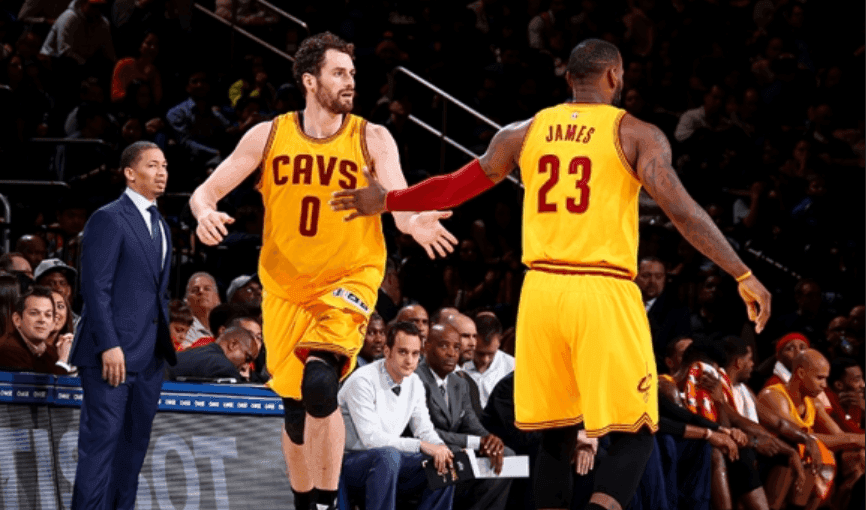 The Cavs were far more focused and energized for their second game this week in New York, and it helped them to earn a convincing road win against the Knicks at Madison Square Garden, running away with this one by the score of 107 to 93. LeBron James led a complete team effort tonight, recording his third triple double of the year with 27 points, 11 rebounds and 10 assists. Kevin Love was fantastic in the paint, racking up 28 points and 12 rebounds. The Cavs led for all 48 minutes tonight, and were suffocating on defense and dominating on the boards.

The Cavs stormed out of the gates in this one, taking command with a 32-15 opening quarter performance. There was clearly a different level of focus than there was in Brooklyn a few nights ago, even without the services of Kyrie Irving, who sat this one out to rest up for the playoff run. The Cavs hit six from long range in the opening quarter, including two from Mo Williams, who was playing in his first game in more than a month. LeBron James led the team in the first quarter in multiple ways, with 8 points and 6 assists. The Cavs were dominant on the defensive end as well, holding the Knicks to 29% shooting from the field, and outrebounding them 20-9 in just the first 12 minutes.

The second quarter was more of the same for the Cavs, as the second unit was able to increase the lead and take a 56-32 advantage into the half. The Cavs were focused and energized on both ends of the floor. On defense, they were able to hold New York to 29% shooting from the field in the half, and also lock down Carmelo Anthony to just 2-12 shooting for 5 points. They continued their rebounding prowess, holding a 33-19 lead after two quarters. Kevin Love led the team in the first half with 14 points and 9 rebounds. JR Smith went 3-5 from long range and had 11 points at the half, and LeBron filled the stat sheet with 8 points, 8 assists and 6 rebounds.

The Knicks offense came to life in the third quarter, and the Cavs defense allowed the New York shooters to be comfortable. After allowing just 32 first half points, the Knicks exploded for 40 in the third. Fortunately for the Cavs, the offensive side of the ball was still very efficient. LeBron scored 11 in the quarter, and Love scored 9 more to keep the Cavs comfortably in control of the lead. After scoring just 5 in the first half, Carmelo Anthony found his stroke and poured in 14 points in the third quarter alone, but the Cavs were still ahead by 17 at 89-72.

The Knicks made it somewhat interesting in the fourth, cutting the lead to 10 as the Cavs offense finally slowed down. The Cavs made the hustle plays that they needed to make, however, and the Knicks were never a serious threat down the stretch. JR Smith and Matthew Dellavedova joined LeBron and Love in double figures with 13 and 10 points respectively. Until the final minute when the bench was cleared, every Cavalier to get meaningful playing time had points and rebounds. The Cavs are off until Tuesday when they welcome James Harden and the Houston Rockets to the Q.

LeBron James gets the mismatch, sizes up Lou Amundson, then drives right at him, posterizing him and Kristaps Porzingis.