FULL HIGHLIGHTS: Cavs Use Highlight-Fest To Down Knicks; 101-83 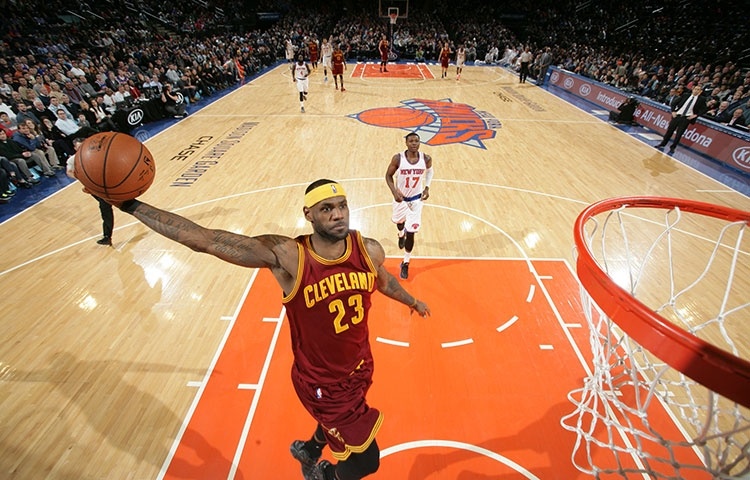 Highlight play after highlight play. It was that kind of night for the Cavaliers who were playing the Eastern Conference bottom-feeding New York Knicks at Madison Square Garden. Just one week earlier, LeBron James was putting on a show with the Eastern Conference All Stars in the All Star Game. He had a little help this time, as he and J.R. Smith put on a show for the Knicks crowd in a 101-83 Cavalier victory.

In the return of J.R. Smith and Iman Shumpert to the Garden, this game got out of hand quickly despite New York keeping it close in the opening minutes. After being up just 9-8, Cleveland turned it up a notch with a 27-9 run to take a 36-17 lead after the first quarter. The starters did almost all of the damage in the first with former Knick Iman Shumpert having the only first-quarter bench points for the Cavaliers. The second quarter saw the bench along with Kevin Love continuing their roll and closed the half out on a 22-13 run that gave the Cavs a 29 point lead with just under a minute left.

The third quarter saw pretty low-scoring from both sides as Cleveland sort of brought down their level of intensity, as they had three two-minute stretches that they were unable to score. At the end of the third, they only outscored the Knicks 19-17 in the quarter. The fourth quarter was all garbage time as Matthew Dellavedova, James Jones, Joe Harris, and Iman Shumpert all got a good run together. Cleveland took a 30 point lead on a Jones three-pointer early in the fourth, which would be back-to-back games that the Cavaliers led by 30+ points on the road. The Cavs were outscored by eight in the fourth quarter, 28-20, and they finished with a 101-83 victory. The final score of an 18-point victory was not indicative of just how dominant the Cavaliers were this game.

LeBron James finished with 18 points, seven rebounds, and seven assists. Kyrie Irving also had 18 for the game. J.R. Smith had 17 points, three rebounds, and four assists in his New York return. Kevin Love had a good game with 16 points and 16 rebounds in just 29 minutes. The Cavalier bench scored 25 points led by Matthew Dellavedova’s eight points. It’s worth noting that no Cavalier starter played 30 minutes tonight, and the only player who did was Iman Shumpert.

Cleveland’s next game is Tuesday night at Detroit where they’ll face Reggie Jackson and the Pistons. 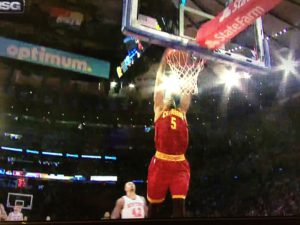